‘Gospel of Judas’: authentic or fake?

The Christian world may be one step away from a big sensation. The U.S. National Geographic Society has posted an English translation of the “Gospel of Judas” on its web site. Up until 1970, the document had been thought irretrievably lost. 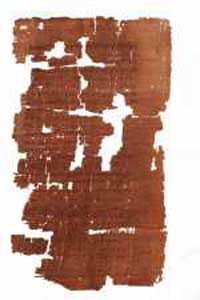 ‘Gospel of Judas’: authentic or fake?

The papyrus comprises 62 pages in the Coptic language. The document dates back to the third or fourth century. It is believed to be a copy of an earlier Greek version. Should irrefutable evidence be produced to authenticate the manuscript, the document will be a major scientific discovery because “it tells a far different tale from the four gospels in the New Testament with regard to the concept of God, salvation, human existence, not to mention Judas himself,” says one of the translators and researchers of the text.

“Gospel of Judas” was found in the Egyptian desert in 1970. The author of the document is unknown. There is also a veil of mystery over the finder of the manuscript. It is assumed to have been dictated by Judas Iscariot, Jesus’ closest disciple who betrayed him for thirty pieces of silver. According to the New Testament, Judas could not stand the pangs of guilty conscience. He gave back the money and killed himself.

An anonymous Egyptian reportedly handed the manuscript to a Swiss collector who kept it in a safe deposit box for 20 years. Later it changed hands several times. Finally, the Mekenas Fund purchased it for an undisclosed amount. Last Thursday an English translation of the “Gospel of Judas” was made public after the five long years of arduous work.

Contrary to the New Testament, it portrays Judas as Jesus’ most favored disciple who turned him in at the request of the latter for the sake of salvation and resurrection. In a key passage the Savior tells Judas: “You will exceed all of them for you will sacrifice the man who clothes me.” The text indicates that Jesus’ spiritual self will be liberated once he gets rid of his mortal physical flesh – this is in complete contradiction to the official church doctrine.

Experts involved in the work say that in addition to radio carbon dating, the manuscript was also authenticated through several kinds of text analysis. Some scientists say the publication of the “Gospel of Judas” could be as important as the 1947 discovery of the Cumarone manuscripts in a cave on the Dead Sea shore.

Mikhail Dudko, an official representative of the foreign relations department of the Moscow Patriarchate said in a statement: “It would be wrong to assume that the discovery of a text ascribed to a noted figure of early Christianity or to one of Jesus’ disciples will change the content of the Holy Scriptures.” According to him, the manuscript may be an important historical document yet its canonical significance remains to be seen.