Phenomenon of Friday 13th makes all scientists brush their superstition aside

From time immemorial Friday has had a reputation of the unluckiest day of the week. It is not ruled that the last working day of the week obtained such an ill reputation because of the crucifixion of Jesus Christ: the monstrous crime was committed more than 2000 years ago on Friday and changed the history of the world. 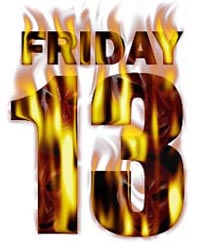 Phenomenon of Friday 13th makes all scientists brush their superstition aside

One may think that considering Friday the unluckiest day of the week is only a matter of superstition. However, experts of many insurance companies that register catastrophes and breakdowns assure that the largest number of tragedies occurs on Fridays.

It is not only Christians that paint Friday black. Muslims stick to the same opinion. The people living in the majority of Islamic countries prefer not to do anything important on Fridays.

The number 13, which is considered the unluckiest number of all, is called the “devil’s dozen” in the Russian language, for example. Russian people used to disregard this belief in the Soviet times. The West, however, prefers not to use the unlucky number when naming streets, buildings, etc. You cannot find seat 13 on board a passenger jetliner or cabin 13 on board a ship.

If 13 occurs on a calendar Friday, people refer to this day as “black Friday.” Unfortunately, this is not a joke or a stupid belief. Surgeons try not to conduct any important operations on Fridays, especially if it is Friday the 13th. Doctors know that the risk of an unlucky operation doubles on such days. Modern science has not been able to explain this unique phenomenon although practically all scientists, including doctors, acknowledge its existence.

Friday the 13th has become an extremely unlucky day for many well-known public personas. American gangster Al Capone, the master of Chicago, was arrested and sentenced to jail on Friday 13th. Rap singer Tupac Shakur was killed in Las Vegas on Friday 13th as well, although he managed to cheat his own death and stay alive after a series of attempted murders before.

A German driving club published its statistics of car accidents two years ago. The research, which embraced many years of observations, showed that the number of car accidents increased by almost 60 percent every black Friday. This is probably why Muslims consider Friday the worst day for starting a trip. The majority of Western tourist companies prefer to observe the rule: they try not to send tourists away on Fridays.

Police officers say that robberies, rapes, murders and many other crimes occur more frequently on Fridays in comparison with any other day of the week.

It is worthy of note that Robison Cruso’s friend, an aborigine, was supposed to be killed and eaten on Friday, when Robinson saved him in Daniel Defoe’s classic novel.

The USA is known in the world as a country of contrasts. A group of wealthy men from the State of Philadelphia decided to exercise their determination and strong will when they organized a club ironically called Friday the 13th. Members of this elite club meet only on black Fridays. At first they have a superb dinner and then start behaving quite recklessly: they smash large mirrors to pieces, scatter salt around, put up umbrellas in the rooms, let black cats out and do other things that common people would find rather daring and insane.

Independent experts studying anomalous phenomena say that mankind has always had a sense of fright towards certain days. A calendar, they say, reflects the time flow and carries information about the cycles of high points of intensity of invisible powers of the Universe which are strongly connected with the Earth. Every civilization would create its own calendar after accomplishing a certain progress in its development.

One has to acknowledge that every human being is a part of this huge world of the unknown. There are too many other important problems that the modern society, as well as modern science has to deal with at the moment. However, many centuries in the history of mankind teach everyone to be especially careful during the time when the invisible powers of the Universe reach their highest point of intensity. As a rule, they carry a very negative energy which eventually leads to air crashes, deaths, troubles, crimes, etc.

There are too many stories about those who either suffered or lost their lives because of Friday 13th. However, one has to pay attention to another side of this mysterious phenomenon. Some enterprising people can make very good money on black Fridays as they entertain the public with Friday 13th horror films. The first film of the series was made in Hollywood in 1980.

No one would ever dare to reject the existence of invisible and mysterious powers hidden behind the black Friday phenomenon. People know absolutely nothing about the laws and natures of these forces which can make a horrible tragedy from nothing.