The Day of Space Technology and Exploration is just around the corner. Space flights have long ceased to be something extraordinary, the Moon and Mars are expected to become the first planets to be colonized by man. The issue relating to the possibility of generating healthy offspring in space becomes increasingly important as space missions turn longer. The failure to deliver a successful procreation program in space will impose severe restrictions on future space exploration projects. Man will have to stay within the confines of Earth in that case. 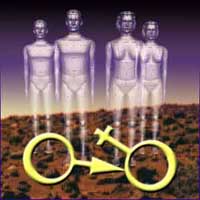 Only those who are prone to self-sacrifice can become good cosmonauts. But cosmonauts are humans made of flesh and blood. What will be the effects of a three-year mission to Mars in terms of physical and mental health of a cosmonaut? It is an open secret that the risks are high. A long journey to the unknown may result in lunacy that will cause irrevocable damage to a space mission. Nobody will be thrilled to envisage at a scenario starring Othello on board the spaceship. These days an average flight can last six months. Valery Polyakov, a medical researcher, spent 18 months on board the space station. He presently holds the world record for the longest space flight. Rumor has it that cosmonauts do things under cover of the night on board the space stations, something that is left unmentioned in regular reports meant for general consumption.

We can spend hours speculating why the philistine tends to associate sex and space. A protagonist in American Pie coined an expression that became hugely popular: “It’s not the launch of a shuttle, it’s just sex.” A few years ago the media spread stories about the U.S. astronauts Judith Resnik and Robert McLain who allegedly had sex while on board the Shuttle. Their sexual congress was part of a special experiment conducted by NASA. The media also reported on similar experiments carried out by the Soviet Union in 1982 when the cosmonaut Svetlana Sovitskaya was working with two male colleagues on board the Soyuz spaceship. Specialists categorically deny the allegations. By the way, a living compartment on the Shuttle measures just 65 cubic meters. Making love in such cramped quarters in the presence of other people is like making out in the open berth of a railway car with lights on. Recent reports said that NASA was considering a chemical sterilization program for astronauts selected for long-term flights. NASA issued a statement to deny those allegations as well.

The issue of sexual abstinence will have to be tackled one way or another before preparations for a manned mission to Mars get under way. “Astronauts are normal healthy individuals. Being sexually active, they will surely form relationships. It’s a serious issue that needs to be addressed,” says Douglas Powell, a psychology professor from Harvard University. He was invited by NASA to study the needs of participants of a long-term space flight. Psychological problems between crewmembers happened before even during the shorter missions. A number of missions were cut short due to such problems.

Some scientists both in Russia and the U.S. believe that using the cosmonauts in their fifties would be the best way to avoid sex-related tensions during a space mission. Other scientists suggest that NASA and Russian Aerospace Agency follow the exampleof thebiblical Noah who took pairs of every species to his Ark. In other words, a crew of a spaceship should be composed of married couples. Finally, Jeffrey Landis at NASA believes male astronauts should be put into disuse in the distant future. Future crews should be women only with semen samples in the test tubes being part of a payload. However, nobody knows whether a spaceship crew comprising several amazons will be able to maintain peace for a long time.

Scientists carried a great deal of research on the reproductive functioning of various plants and animals in space. Apart from pursuing purposes similar to those related to human reproduction activity, scientists also sought to gain information to be used for reproduction of plants and animals that could be consumed during a space flight. However, they failed to conduct a complete reproduction cycle on any of the species. The experiment went well at certain stages yet it never brought out the intended results. At the same time, lab rats were found to be capable of developing embryos in zero-g. However, it takes a lot to carry a healthy fetus to term, a would-be rat mother can lose up to a quarter of its weight for the sake of future offspring. The weight goes back to normal after a landing. In short, males do not easily fall into the mood for copulation while in g-environment. But they catch up as they adapt to new conditions. All the females were impregnate yet the uterus of a third of the females did not allow the embryo to become implanted in its inner wall. The fetus falls behind in its development by 10% but it catches up once the experiment is put on hold.

The space experiments make childbirth for rats more difficult. A litter can be stillborn at times. The average number of newly born rats in a litter does not change. Nodifferences were found between the offspring carried to term in space and those developed in a normal environment.

Scientists discovered lots of regularities by doing research in this extremely delicate area but they failed to arrive at any exact conclusions. “A new habitat can be regarded as cultivated by a biological species only if the latter retains a normal reproductive function,” as Josef Stalin, a great expert in the matters of science, once put it.

Cybersilicone was developed specifically for making undergarments worn by cosmonauts beneath their spacesuits. The material has excellent heat-retaining characteristics, it is light and breathable, and nice to touch. The latter quality actually inspired some sharp manufactures of sex aides who put the material to good use by launching production of vibrators and simulators for most earthly purposes.

Russian scientists designed a special suit dubbed Chibis (lapwing) that can make the blood rush to the feet once the air is pumped out. The suit was used for building a device for treating the ejaculatory dysfunction. The device won a number of prizes at the international exhibitions.

The so-called “smart mattresses” are in great demand in the United States. The mattresses were designed using NASA technology and a special viscose-based elastic foam with memory effect. A sound sleep is guaranteed in any position.