Einstein and his deadly error about E = mc2

There is a tiny little thing. You can't see it with your eyes only. And then, all of a sudden, there is a "BIG BANG" - and out of the nowhere, out of nothing, comes the whole universe, billions of suns, millions of galaxies, the whole space of about 16 million light-years, apparently representing our eternity of space and time. And all good-hearted scientists of our Earth start their useless struggle for logical reasoning. It is that simple. Out of God's pet has come our World as it is and everybody believes in his stupidity that THIS is reality. In fact, out false reasoning comes from superficial brains, all our philosophers of the last 2000 years, who have put the importance, the power and the stupidity of one single species, the Homo sapiens in the middle of the Universe. They didn't understand anything about the true reality, dictated by the fundamental laws of our platform of living, our Earth. And such, all politicians, prize-holders of dynamite and all "Science"-readers cannot see that they cultivate an impossible view on the World as it is and that they dictate an idiotic reasoning for us, the so-called "normal" people, about the reality in which we apparently are living and dying - towards a future being destroyed by us wilfully and out of pure dullness with the idea of growth and stock exchanges. 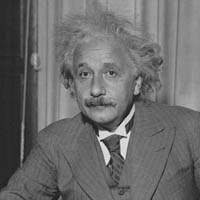 Einstein and his deadly error about E = mc2

All this started, when Albert Einstein created his formula E = mc2. He has written afterwards that he does not know if that formula was really correct. Assisted by his very highly developed brain, Einstein felt that something could be wrong about his E = mc2… Here follows Rene Delavy's doubts about Einstein's theory and the proofs for his highly risky reasoning:

The formula E = mc2 is perfectly correct, but it does not apply to what we think it means, although it is perfectly true that: Energy equals mass (of any kind) multiplied by (simple) speed square.

This formula is definitely a MAXIMUM-Formula. The highest speed ever is light-speed. Physically speaking, it cannot be multiplied. Einstein himself gave the proof for this. But nevertheless: mathematically it can be multiplied with itself. But light-speed is nearly an indefinite figure. Multiplying an indefinite figure by itself results in a number that could be set equal to infinity. So the formula of Einstein is perhaps applicable for the Big Bang, but never for making explode a simple atomic or hydrogen bomb. Never. Be the mass so little as be: Multiplied with c2, this material would logically make the whole Earth explode.

The correct formula for the atomic bomb should have been:

Conclusion: To make explode any mass in a bomb, we don't need light-speed square, because this formula would result in an absolute maximum of speed and mathematical acceleration being possible at all. And such a formula would make explode the sun system, our galaxy or even the entire universe.

Whoever wants to make explode our universe, therefore, must achieve to make explode our Earth with the formula E = m x c2 and we will have a peaceful Earth and a peaceful Universe forever and ever. And afterwards, no good hearted God can ever more be invented, because there would be no human beings to wish having their holocaust on other beings sacrificed by his personal God, be it invented by any guy if any sort of religion in the World.

What I mean is the following: Mankind is responsible for so many disasters and holocausts in this world that it is logical of him trying now to achieve his self destruction as a result of my formula "Power x Stupidity = Self destruction". This, in fact, could be the only way out from his total call for nihilism. No God would ever accept a Homo sapiens able to kill and torture just anything that is moving, that is thinking and believing in his unique God. The true God of existence would have finished that hell long before any US-designer creating an  idiotic specimen of a cynical Homo sapiens. In fact, God's nihilism is saying: "Get rid of all poor and weak beings. Let the fittest get all the honours and Nobel-prizes. Therefore, throughout the Universe, the powerful beings must kill and torture all other beings in an eternal holocaust. This is my holy programme of nature. That the fittest and most powerful animals or plants, including the stupid Homo sapiens, kill in politics, in ecology, in economy and in culture all the rest. I, God, have only these only goals - and the rules of humanity can get lost."

This in fact is the God of our nature, or the nature of our God... or, for more stupid beings, of the Gods that have slaughtered millions of other-thinking beings in Latin America or Africa and burnt hecatombs of women in fires and under falling stones in the name of Jesus, Mohammed, Buddha and all the rest of legends having inventing personalized Gods, for the sake of weak human beings in the last 2000 years. This is what Gods are doing through all eternal times and all indefinite spaces. The only chance for human beings on Earth would be to say: "WE CHANGE THIS PROGRAMME OF NIHILISM. WE WANT TO STOP THE ETERNAL HOLOCAUST OF OUR BEING. WE WANT TRY TO CREATE OUR OWN PARADISE ON EARTH, NOW." Yes, dear friends, THIS is the fundamental truth about the powers and the stupidities that govern our own self-destruction of a dull species!

Think of this fact of ethical thinking by a living God and you will wake up, even it is still middle of the night of your awareness, in your casino-money-world - where humans can apparently purchase the whole nature for a penny because its worth is nearly zero. Over 99 percent of human beings believe that they know what reality is. In fact they live Hollywood-life dictated by animals with names as Bush, Blair, Hitler, Stalin, Mao, Pinochet, Milosevic, Napoleon, and some other crazy brains like Sartre, Popper, Derrida, Huntington, Fukuyama and all philosophers which have ever put the almighty power of men OVER the fundamental laws of nature dictated by our life-platform, our mother Earth.

That's all folks, for today. Think of these words. All stupidities of this world, such as Erich von Daeniken with his E.T.-Spielberg-Extra-Terrestrials und funny "Mystery Park", J.K. Rowling with her children-dulling fantasies of a marginal "Harry Potter", Stanislaw Lem's fantasies on a science-fictional future that humans never well see to become true, all esoteric shit in all bookshops of the world including eternally revolving dull novels of "Fräuleinwonders" and other hypes, the odd circle of ever the same "human" feelings, edited only of self confident and self-destructing Homo sapiens, all these folks don't grasp that it is absolutely impossible to pass, as living body, distances of any light-years. Only light itself can travel with that speed. There are billions of beings on other planets in the Universe. But only the one being living on Earth has ever came near to the planet Earth. The belief to be able to get rid of his own planet, is a terrible crime and this vanity is at the source of his poisoning and scrapping the nature and biology of his unique platform of living, the Earth.

All think tanks of all mafia organisations (USA , UNO, EU, NGOs etc.) are together not worth one page of my writing. They all represent - without the ability of any network thinking, the world's dictatorships of dull majorities (=democracies), dictatorships at the service of powerful idiots like Bush, Putin, Hitler or Mao and all other politicians. The dullest of our humanity have taken over this planet, whereas all wise men have been arrested near Guantanamo - or made stop writing the only reasonable intellectual of the present, by the most stupid feuilletonists ever. All these wise and powerful guys are poisoning us with shitty brain stuff, all Murdoch's and other cynics' TV-channels, all around the world (not to speak about most of the dynamite prize holders with little brains, concentrating on just ONE object of interest, that will show to have assisted in making explode growth and vanities) - are not capable to think and analyse reality on a reasonably high level of abstractedness. They are just full of greed and blindly running for more profits, growth and wealth. They have emptied their brains of any complexity, long ago, for some amounts on Swiss bank accounts.

And now, we soon will fall in our own grave. Good God: it was about time for this, before the slaughtering of everybody against everything that is moving, has come to perfection in the years of the new valid formula "Power x Stupidity = Self destruction", which has come to his climax and final lap in the 20th century.