Russian man becomes healer after his own death

Scientists believe that 30 percent of patients, who describe their after-life journeys, are mentally unbalanced individuals

One of Julia Robert's films, “Flatliners,” tells a story about a group of medical students, who decided to conduct dangerous experiments on each other and stretch the border between life and death. When the students were experiencing the state of clinical death, they saw people, whom they had hurt in distant past. Vladimir Kravchenko, a resident of Volgograd, likes to watch this movie, although he has different impressions of staying in another world. “I have seen people, who were very dear to me, who gave me very good memories. When I was there, it seemed to me that I was racing along a highway at night, meeting my acquaintances, who were giving me pieces of practical advice, saying that I was not right about something, or I could do something a lot better,” Kravchenko recollects. 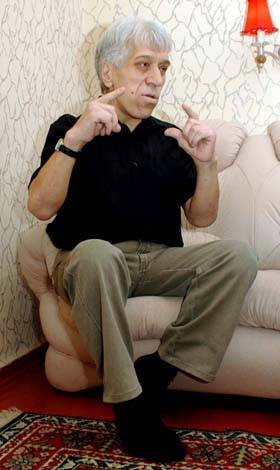 Vladimir made his first trip beyond about ten years ago. He spent a couple of hours in coma after a serious back injury. When Vladimir recovered, he felt new energy in himself.

“I became a lucky person. My ailments disappeared; I became professionally successful too. However, I realized that such things were not incidental,” Kravchenko said.

Vladimir could see faces of saints. He could also see a big eye that was hanging over him before the man was going to bed. So-called X-ray people, or other unique individuals usually observe the image of the eye. The eye became Vladimir's “guardian angel,” the source of his energy. If the man had family or financial problems, they would help greatly. The man started worrying and decided to consult a medical specialist. Doctors examined Vladimir and concluded that he was an absolutely normal man.

When Vladimir's mother died, his heart could not handle the tragedy, and he went on his second trip to another world. He remembers everything that was happening to him there.

“I was not alone – my son was with me, a schoolboy. We found ourselves in a town. The people were wearing white clothing there, and I suddenly saw my deceased parents among them. I could see that their faces were happy, so I calmed down. Then something happened, and I returned to this world again. As I found out later, my son was sleeping during the time when it all occurred to me, and he saw the same too,” Vladimir Kravchenko said.

Vladimir Kravchenko discovered incredible qualities after that incident. The man learnt how to handle pain. It is enough for him to stroke a painful spot with the palm of his hand to heal it. He has already cured himself of the stomach ulcer. Kravchenko's healing power is concentrated in his hands. It is worth mentioning that Russian X-ray girl, Katya Cherkasova, also said that she was treating people with remarkable little crystals on her palms.

Vladimir Kravchenko's career was developing further on. He opened a construction company and was feeling verywell until it was time for him to set off on a new journey beyond.

Kravchenko, 55, has recently returned to Volgograd from Moscow. The man has had two extremely complicated operations in Burdenko's institute of neuro-surgery. Doctors removed a tumor from the head of the unique individual. The operations were successful – the man recovered very quickly.

“When the surgeon came to see me the next morning, he sat down on a chair with amazement. I was feeling very well, I could walk and make jokes. When I told the professor about what I had seen during the operation, he said that I should not talk about it much. The professor told me that he had already had a unique patient like me before, who knew how to use the help from above. However, I decided to share my story with people, because it all really happened to me.

Vladimir is doing well now. He has to take expensive medicines to recover from the operations, but the eye still visits the man and gives him optimistic energy.

Sergei Sukachev, a senior medical specialist of the Clinical ER Hospital says that he has never had such patients in his practice. “I have never met anyone, who could tell me that they saw something during moments of clinical death. None of my colleagues had such incidents either. I have definitely read a lot about the phenomenon, but it is hard for me to believe such stories,” the doctor said.

Extrasensory individual, Anna Visotskaya, believes that Vladimir Kravchenko is a unique person, who has been marked with a gift from heaven. “If he can handle his own diseases now, he will probably learn how to help other people too. I know a German man, who has a similar fate. He has cured his relatives of serious diseases after he had visited another world twice.

The national institute of neurology has recently conducted a research, in cooperation with nine large hospitals. As it turned out, only one percent of 500 people, who “returned” from beyond, could recollect what they had seen in their dreams. Scientists believe that 30 percent of patients, who describe their after-life journeys, are mentally unbalanced individuals.

American scientists, who studied the clinical death phenomenon, determined that the non-physical existence was characterized with cessation of all physiological functions of the human body and increasing unpleasant noises. When a person recollectsthe moment of death, he or she usually says that they were flying along a tunnel, at the end of which they saw the light. People say that they can see episodes of their lives passing them by; they see their deceased relatives and friends.

Specialists say that one can experience symptoms of non-physical existence during yoga sessions or when someone has a severe form of migraine. A similar phenomenon can be observed with mountain-climbers (when they have anoxia) and cosmonauts.

On the photo: Vladimir Kravchenko