Humans may find another planet to live on before Earth dies

NASA specialists discovered water on Enceladus, a natural satellite of planet Saturn, in March last year. After studying the images of the satellite relayed to Earth by Cassini probe, scientists say there is evidence of geysers on Saturn’s satellite, which gush right into open space. “By all appearances, Enceladus is yet another planet-ocean crusted with ice. The water in that space ‘fish tank’ is pretty warm,” says Oleg Korablev, deputy director of the Institute of Space Studies under the Russian Academy of Sciences. 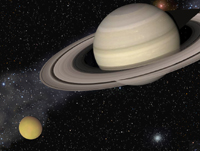 Humans may find another planet to live on before Earth dies

“Not unlike the tide of the ocean produced by the attraction of the moon, the strong field of Saturn makes the waters of Enceladus’s inland ocean break through the ice and come up to the surface. The water pockets are likely to occur at a depth of several meters. Scientists are getting increasingly enthusiastic about the processes on Enceladus because its inland ocean is currently active, a direct discharge of water is taking place,” says Korablev.

Q: A space race has really picked up recently. The European Space Agency, NASA, the Chinese and Japanese launch their spacecraft one after another in quest of any life forms. Which planets of the solar system do you think have good prospects for the discovery of life?

A: Take Titan, one of the moons of Saturn. Titan is quite interesting because it is an installation of Earth. Every living creature on Earth depends on the exchange of hydrogen in nature while nitrogen is a key component on Titan. Nitrogen rivers flow across the moon of Saturn, nitrogen snow falls down, and nitrogen ice covers the ground. Methane is a key compound on that planet. Looks like everything will go off with an awful sound should you strike a match. On the contrary, explosion is out of the question since Titan’s atmosphere has no oxygen.

If there was a list of the solar system planets regarded fit for humans, I would put Mars on top of it. Now different nations are competing against one another for the red planet. The American spacecraft Mars Exploration Rover has arrived in Mars orbit earlier this March. But the ESA’s Mars Express already works out there…

As the U.S. “eye” is still nearing the required Mars orbit, the European equipment on Mars Express is frantically trying to cream off the best data on the red planet.

Scientists show plenty of interest in the planets of the solar system, and with reason. The point is that all our knowledge about Earth is based on hypotheses. We do not know what exactly lies inside our planet. Still, we can only imagine how Earth looked like during the era of microbes and viruses. Therefore, we simulate the evolution of the planet by looking into the solar system planets with a structure similar to that of Earth. We are trying to understand the principles of the evolution of our planet, find out more about its past, the present and the future.

Q: Georgy Golytsin, Academician of the Russian Academy of Sciences, unveiled the time when the world will draw to a close. As by astrophysicists’ estimates, the Sun will turn into a red giant and swallow Earth, Venus, Mars, Saturn and other planets of the solar systems in 5 billion years. Perhaps the human race should look for a new galaxy before time runs dry?

A: Scientists just can not jump over their heads, they are doing their best. The preparations for an interstellar manned mission to Mars are under way. Maybe astronauts should land on Mars right away. Let us use robotswhile man willbe orbitingthe red planet in a space station similar to the International Space Station.

Some technological barriers are in the way of humankind to other galaxies. A next-generation engine is missing, that is the biggest setback. We are still using the engine built by Sergei Korolev in the 1960s. The engine is built using the modern technologies but a fundamentally new concept is needed for breaking through to another galaxy.

Q: As an astrophysicist, do you agree to the statement that Earth will cease to exist in 5 billion years?

A: The stars go through different stages in their development. Every stage has its particular color. The stars are white at the beginning, and they turn yellow later. The stars become red giants as they reach the peak of their career. Finally, they end up turning into black holes. Scientists began studying the stars after arranging them by the color. The stars spread along a smooth curve with a few individual islands. It was not just a disjointed cloud. According to the diagram, the star shines brighter at the start, later the star grows dim as it cools off. The diagram enables scientists to make a prediction about the life of our Sun. The planets of the Earth group will come within reach of the Sun when it becomes a red giant. But it is going to be a long story, humankind still has a great deal of time.

Q: The ESA use the Russian boosters for their space missions, the Europeans also install their own and Russian-made equipment on their spacecraft. In short, they work actively in the conditions of international cooperation. Why not follow their suit and make good use of an European vehicle until a reliable Russian becomes available?

A: I agree to this point of view yet cooperation is far from running smooth and steady. Unfortunately, Russian projects in astrophysics have to wait in line for the budget funding. In case your space experiment runs aground, you will have to rejoin the back of a line and wait until others launch their rockets. In 1996, we were quite embarrassed following the fiasco of our interstellar mission Mars-96, all the Russian equipment had to be urgently put into space by European and U.S. spacecraft.

Q: A number of Russian researchers including some of the staff of your institute were fed up with constant problems and moved to the West. They seem to be doing fine out there. You are one of the world’s biggest experts in astrophysics, and you still work in Russia. Could you tell me why?

A: I had a moment of hesitation after the flop of Mars-96. But my vacillation vanished pretty fast. Now I am not going to move anywhere though a window of opportunities remains. Nowadays Russian astrophysicists believe that our plans can be realized. One of the reasons has to do with the fact that the budget funding of space studies doubled this year.

I would hate to abandon my institute friends. Many middle-aged researchers fell victims to the social cataclysms of the recent years. Those who remain are either old or young.

Besides, Russia has now incorporated into the world community of space explorers. The Germans and French were quite happy to put their equipment onto our spacecraft some 15-20 years ago. These days we might as well follow suit and take part in the NASA and ESA missions.