According to an official statement released in January, the mining of helium-3 on the Moon will be the main purpose of the Russian space exploration program. “We are planning to set up a permanent station on the Moon by 2015. The industrial mining of helium-3, a rare isotope, is expected to begin on the Moon in 2020,” said Nikolai Sevastianov, head of the Rocket and Space Corporation Energia. The lunar mission will involve the use of a Russian space shuttle Kliper and an interplanetary space tug Parom. 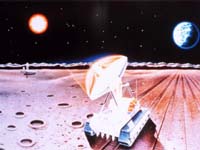 The National Aeronautics and Space Administration, NASA, also regards the presence of helium-3 in the lunar crystals as a good reason for kicking off a lunar exploration program. Meanwhile, NASA is not planning to send any missions to the Moon until 2018. The United States remains the only country whose astronauts walked the Moon. NASA sent six manned missions to the Moon between 1969 and 1972. China and Japan also intend to build lunar stations. However, the above countries are likely to commence their lunar exploration programs in the 2020s.

Nezavisimaya Gazeta already wrote about the grandiose plans of Russia’s space agency. We also expressed a couple of doubts whether the lunar exploration program was worthwhile and why today’s Russia should be concerned with a helium production project, which might have a negative impact on implementation of other space projects e.g. a mission to Phobos that has long been in the works. (for further reference see NG issue of September 28, 2005 ).

Speaking of helium-3, it is quite noteworthy to point out that one ton of the rare isotope costs $4 billion. The Moon is reported to have millions of tons of helium-3, which is an essential ingredient for starting up a thermonuclear reaction that is yet to become a reality in terms of electric power generation.

The basic thermonuclear reaction can get started at temperatures ranging from 100 million to 200 million degrees as plasma is being squeezed at pressures that simply defy imagination. Four hundred and four ways of conducting the reaction were devised. However, only one of them was found to be feasible. It is called TOKAMAK, and was originally made by Russian scientists. It is reported to be the cornerstone of the international research reactor to be built in France.

If the calculations are accurate, the reactor will provide answers to all the remaining questions that. In the meantime, nobody can give even a rough estimate when it will be used for building the first thermonuclear power plant.

Helium-3 is undoubtedly a very interesting isotope. At the same time, the use of helium-3 in a thermonuclear reaction requires incredibly high temperatures, five times higher than those for starting a deuterium-tritium reaction.

Speaking to Nezavisimaya Gazeta, Academician Evgeny Velikhov said that contrary to some reports in the media, he had never supported the idea of mining helium-3 on the Moon. The world has already spent $30 billion searching for ways to start up the basic deuterium-tritium reaction, and therefore we should first find a way to start it up. Otherwise, it looks very much like speculation, says Velikhov.

“The concept of using helium-3 in a thermonuclear reaction does not contradict the laws of physics,” said Valentin Smirnov, director of the Institute of Nuclear Synthesis of the Kurchatov Institute, in an interview to Nezavisimaya Gazeta. “Specialists estimate that bringing that isotope from the Moon could be profitable in terms of energy. As regards the directed radioactivity, such a reactor would be a lot cleaner than that running on deuterium-tritium. But a deuterium-tritium reactor is completely safe as compared to nuclear reactors. It will not cause a large-scale evacuation of people living close to a thermonuclear power plant. In comparison to tritium, helium-3 has other many other merits, though I will not elaborate on this point. In short, we are ready to deal with helium-3. Meanwhile, we are not by any means ready to maintain that helium-3 is the only way of resolving energy issues of mankind,” said Smirnov.

“We met with specialists responsible for developing space part of the project,” added Smirnov.

“I told them that the work with helium-3 could be a second stage only. Count us out if you want to stake everything on helium-3 only. Those guys are normal, sensible people so they agreed to our approach. I got a very favorable impression out of the meeting,” said he.

According to estimates by Academician Erik Galimov, director of the Research Institute of Geochemistry and Analytical Chemistry, calculation and design costs pertaining to space part of the project will be in the neighborhood of $15 billion. Galimov rather supports than objects to the lunar helium mining. However, he too finds the idea of Sturm and Drang absolutely unacceptable.

“It should take decades of research until lunar industry takes shape,” said Galimov.

In other words, everybody is well aware of the situation, and nobody is willing to rush ahead with the helium-3 project. In the meantime, the officials have set the deadline – 2015 i.e. earlier than the U.S. lunar exploration program gets under way. A few decades ago, the Soviet Union was defeated by the United States in the battle for the Moon. And that battle cost much less.