Rostislav Beleda worked as a sexologist in the Central Aviation hospital for many years. The doctor said that the heroic deed of space exploration was rather harmful to cosmonauts' health. When space conquerors returned to planet Earth, medics had to spend a lot of time teaching them most primitive things how to walk and be able to move normally, like any other human being. Weightlessness exerts a great influence on the muscle system, not to mention the nervous one: cosmonauts become rather short-tempered after space adventures. The development of the space industry returned new complaints from cosmonauts: Vitaly Sevastianov and Andrian Nikolayev confessed after spending 17 days in space that their sexual abilities suffered most, whereas other bodily functions were retrieving rather quickly. 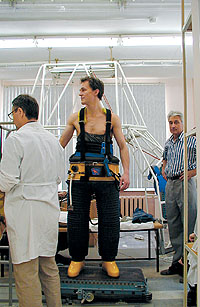 The complaints became the main reason to establish a special laboratory in Russia to study cosmonauts' intimate problems. Space heroes were rather shy to come to the laboratory and talk about their problems in other doctors' presence. The majority of cosmonauts were asking for private conversations with the lab's chief.

When a spaceship enters the Earth's orbit, the human body experiences a change of blood circulation: blood starts flowing to the upper part of the body, whereas the lower part (beneath the waist) suffers from a shortage of blood supply. Internal organs gradually lose their functions because of the insufficient blood flow. Russian medics decided to rehabilitate cosmonauts by means of a special gear, which makes blood circulate actively in the lower part of the body.

Scientists of the Central Research Institute developed a special suit for cosmonauts, called Chibis. The suit bears some resemblance to metallic pleated trousers. The air is pumped out of pants, making blood rush to legs. As soon as the pressure decreases, pelvic organs receive considerable blood supply. The process is so intense that it can make some men lose their consciousness.

The successful operation of the suit suggested another idea: scientists decided to use the principle of the Chibis suit to develop a compact device to treat erectile dysfunction. The device looks like a conic bulb, which is connected to a discharge pump. The new invention of the space industry became a very effective device to retrieve potency for male patients. The device intensifies the blood circulation in the penis almost four times, normalizing all blood vessels. Yuri Gagarin, the first man in space did not have any similar problems. They say that Gagarin did not have enough time to be frightened – his flight lasted for only 108 minutes.

The majority of cosmonauts, who fly into space alone, complain of psychological discomfort that they suffer from in spaceships. Black velvet sky and huge stars have a rather depressing influence on humans: stars do not shimmer in space, because there is no air there. A lot of cosmonauts said that stars were hypnotizing them. The permanent feeling of danger has a negative influence on men's health too.

Valery Polyakov, a leading specialist of the Institute for Medical and Biological Problems, said that the main goal of the above-mentioned Chibis gear was to test the reaction of the cardio-vascular system. “I do not remember receiving massive low potency complaints from cosmonauts. Chibis was not invented to solve men's sexual problems. Vacuum improves the blood circulation and the tone of vessels in legs and pelvic organs. The device that sexologists invented has a psychotherapeutic effect: a patient takes a look at his reanimated body part in the bulb and calms down. If a man is certain of his own energy, he has very good chances to succeed.

Conceiving a child on board an orbital station will probably become real in distant future. Cosmonauts are exposed to radiation, the level of which considerably exceeds the amount of radiation that human beings receive on Earth. If a baby is ever born in space, the child will probably have atrophied muscles. In addition, the child's bones will crumble like glass. A space child will not have an immune system – the baby will fall ill very easily.

Needless to say that the problem of conception itself will be rather problematic under the condition of weightlessness: a man and a woman would have to take much effort not to fly away from each other in opposite directions. If sex occurs in space someday, there will be special facilities invented for it. NASA has already conducted a “sexual experiment” on the matter. As it became known as a result of a ten-hour research, a missionary position is impossible in space, whereas other positions require flexible belts and other devices.