The hurricanes which have been raging recently off the American coast were created by Russian military specialists. Using a special electromagnetic generator they have perfected a secret meteorological weapon, capable of striking innocent people from any distance and destroying their homes. This accusation was recently made by American meteorologists. Russian scientists did not even begin to defend themselves: in their opinion, if anyone is causing damage to the climate, it is the Americans, with their famous NAARP, “The project for active research on ‘the northern lights’, being to blame. 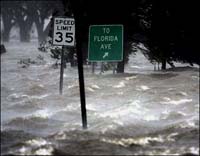 “The base where this research is taking place is a specially secured secret territory,” relates the head scientist of the Schmidt Institute of Physics of the Earth and doctor in physical-mathematical sciences Valeriy Rudakov. “It is enclosed by a barbed wire fence, the perimeter is guarded by armed Marine Corps patrols, and the air space over the research area is closed to all civil and military aircraft. Scientific journals maintain that the NAARP can create artificial northern lights, can jam radar stations for the early detection of launched ballistic missiles with interference, and can contact submarines and find the enemy’s secret underwater complexes. Radio emissions from the installation are apparently able to penetrate the earth’s surface and then locate hidden bunkers and tunnels, burn out electronic equipment and put satellites out of operation.

But that is not all it can do. The main pride of the project’s founders is technology used to influence the atmosphere, capable of causing changes in the weather, including artificial natural disasters, such as torrential rain, earthquakes, floods, tornadoes and hurricanes of the strength of Rita and Katrina. Could that mean that their countrymen, living off the southern American coast, were actually victims of these experiments? In the opinion of our source, this possibility cannot be excluded…

The American military have long been researching the possibility of influencing the weather. In 1946 the chemist Vincent Schaefer from the corporation General Electric sprinkled one and a half kilograms of dry ice out of an aeroplane over the Greylock mountains, which caused huge snowfall. Several years later, the meteorologist Bernard Vonnegut, brother of the famous writer, achieved the same effect by spraying clouds with particles of iodide silver. By 1951 ten percent of US farmland was watered artificially. During the Vietnam war a project was implemented under the code name ‘Poppy’. From 1966 to 1972 the American aviation industry made thousands of planes for dispersing reagents over the so-called ‘Ho-Chi Minh trail’ in the hope that the additional precipitation would make it impassable for the North Vietnam forces.

“Similar research has been carried out in our country,” continues Valeriy Rudakov. “The largestof thesewas the “Sura” research facility 150km from Nizhniy Novgorod, belonging to Radiophysical Research Institute. It is comparable in its power with the American NAARP, although it carries out research in a wholly different field: it has been studying acoustic processes in the atmosphere.

At the beginning of the 1980s workers on the facility began to see anomalous phenomena, such as strange glowing, and bright red balls, suspended motionlessly or streaking rapidly through the sky. If the witnesses had not been physicists, they would have undoubtedly come to the conclusion that flocks of UFOs had started gathering in the region. But they knew that the reason for these phenomena was luminescent light from plasma masses, resulting from “Sura” work.

“After the collapse of the USSR, work was stopped as funding was cut,” notes our source. “The apparatus began to rust, wild grass grew on the field. However several years ago the “Sura” research work was resumed. Now the complex takes part in international projects for research into the ionosphere, and works alongside American scientists. In that case it is ridiculous to blame Russia for creating natural disasters in America. Even if “Sura” were capable of it…”

“Sura” is not the only complex in Russia devoted to research into the weather. Similar experiments have taken place in Novosibirsk , Tula and Khabarovsk . Professor Martynov, head of the Tula project, managed to create an instrument to measure abnormalities in the Earth’s gravitational balance. Consequently it was able to correct the signals it received and influence the weather. The experiments had a military role and were developed to disturb the radar systems of any potential enemy, hence the USA. Yet they were stopped 20 years ago. According to Rudakov, “if climatic weapons do exist, then they have even been made secret from the specialists”.

However, American meteorologist Scott Stevens who initiated the accusations, considers himself better informed than all other specialists. According to him, hurricanes ‘Rita’ and ‘Katrina’ were artificially created using a secret meteorological weapon, made by Soviet scientists back in 1976, and in the near future the experiments will be continued. “New hurricanes will be directed at major American cities, marking the startof a ‘weather war’,” Stevens told journalists. “I personally have seen artificial clouds over the state of Montana, and I started to feel ill…”

“It must be said that even in America a very small number of specialists have voiced their support of Stevens,” concludes Rudakov. “Most scientists think that these accusations have no basis in fact, as they are inconsistent with elementary laws of thermodynamics and studies on hurricanes. In the same way, there is definitely no foundation for accusing the USA of intentionally sending extraordinarily cold or thawing weather to Russia.”