Powerful bursts on the Sun have become quite frequent lately. Planet Earth was seized with a strong magnetic storm several days ago, which measured almost the maximum on the 0-9 scale. Proton currents were especially intensive in the European part of Russia. Common people's interest in the solar activity is not limited to the desire of having a good tan. The activity of the Sun may result in bad health, headaches, and blood pressure surges. It may also disrupt radio and satellite communication, or lead to technical malfunctions in the work of devices possessing strong electromagnetic fields. 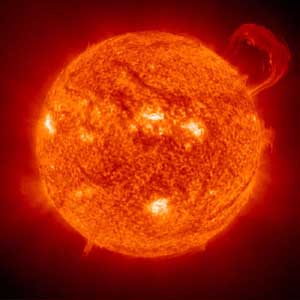 Magnetic storms usually cause a lot of trouble to people. Such days are especially dangerous to those, who suffer from cardiovascular diseases. Flying control officers, drivers and operators experience a lower reaction during magnetic storms. The amplitude of magnetic fluctuations increases from southern latitudes to northern ones. In Russia, railway accidents, for example, are more frequent in northern territories. Athletes are subjected to traumas during magnetic storms. Artists probably make the only group of people, who treat magnetic storms with sympathy. Magnetic storms are visible in the north, in the form of beautiful Aurora Borealis, or northern lights.

A magnetic storm left the Canadian capital, Ottawa, without electricity for eight hours in 1989. A solar storm put the TV satellite Telstar 401 (owned by AT&T) out of order in 1997. Galaxy IV satellite was damaged with a magnetic storm the next year – the satellite was operating ATM machines and aviation tracking systems. The solar storm ruined the Japanese satellite Asko, which fell down and sank in the Pacific Ocean. Magnetic storms affect the work of cellular communication too; they cause damage to the work of the Internet, automatic systems, disturb high-frequency radio communication and so on and so forth.

About 500 magnetic storms occur during the eleven-year solar cycle. The phenomenon is very important for science, although it is quite unpleasant for the majority of people. Magnetic storms are very helpful in the study of plasma qualities, for instance. Plasma, as a state of substance, has rather large perspectives in the future – it might become the basis of the energy industry. Four spacecrafts explore the phenomenon of solar activity nowadays. Russia launched its satellite, Koronas-F, in 2001. For the time being, it is the only Russian scientific satellite in space. The technical level of the Russian satellite is comparable to the one of the Japanese spacecraft. Two other solar crafts were launched by the USA and Europe. Scientific forecasts about the solar activity, forthcoming magnetic storms and the state of the Earth's atmosphere are highly important for the control of the Russian orbital station. Those data were also used for sinking the Mir space station – it was necessary to make the spacecraft fall down in a specific area of the Pacific Ocean.

Members of the presidium of the Russian Academy of Sciences gathered for a special session last week. The meeting was devoted to recent global natural phenomena. Vladimir Kuznetsov, the director of the Earth Magnetism Institute, presented a report about the work of Koronas-F satellite during the session. According to Kuznetsov, a space observatory received about a million of solar X-ray solar spectrums, over 300 thousand high-resolution X-ray images of the Sun, numerous time profiles, new data about the currents of solar space rays and the ultraviolet solar radiation. “Magnetic storms provide our institute with a lot of valuable information. However, I personally suffer from these storms like anyone else,” the scientist said.

Another specialist of the above-mentioned institute, Vladimir Obridko, said that the solar activity would be decreasing in the beginning of the century. The activity of the Sun will drop by 20 percent. Global warming theories may face an unexpected obstacle in the form of the lazy star. The solar activity will be minimal in 2007, when the Kyoto Protocol is in effect. The humanity will witness the collision of two global processes: the greenhouse effect and the colder Sun.

Several cycles of the solar activity - 11-, 22-, 100-, 400- and 900-year cycles - will coincide in the beginning of the century. It is hard to make a precise forecast because of the lack of information about the solar radiation. Humans still do not know much about the Sun, although it is possible to say now that the Sun will cause a mess on Earth in the near future.