A human being is quite a mysterious and unique creature. Humans have never been able to reproduce many organs, cells and tissues in technical versions – appliances or mechanisms. Facts and figures of the human anatomy still strike imagination despite the up-to-date level of scientific development. 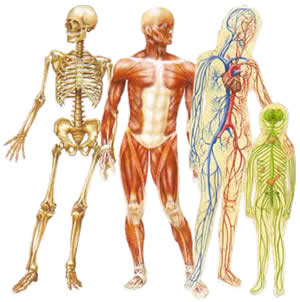 The length of all blood vessels in a human body reaches about 100,000 kilometers. Tiniest vessels – capillaries – are not more than four micrometers in diameter. The amount of blood in a human organism is not constant, although it does not exceed seven or ten liters. This is definitely not enough to fill all blood vessels. Furthermore, red corpuscles are about seven micrometers in diameter, which makes it hard to imagine how they manage to flow along 4-micrometer capillaries.

Everything is normal from the point of view of physiology, though. Not all vessels are filled with blood. Some organs usually receive higher blood nutrition than others, depending on the extent of their activity. The digestion system is very busy after dinner, which requires a very intensive blood supply. The normal work of the brain is hindered with a lack of blood in this case – that is why people feel sleepy after eating. A red corpuscle is a living cell that possesses a very elastic membrane. It simply stretches out to be able to go through smallest vessels.

A human body consists of a quadrillion of cells. A skeleton is formed with 206 bones. The shin-bone is capable of standing the axial load of 1600-1800 kilos (the weight of a car). It is also the longest bone of the skeleton – it reaches about 27 percent of a person's height. The tiniest bones of a human being form the hearing-aid – they weigh only 0.05 grams. A shoulder-blade is not connected to any other bones – it is fixed in a body with the help of 15 muscles. Fifty percent of a bone is made of water. A human being stops growing as he or she turns 24 years of age. The growth of a young individual slows down a little at night time, but returns to the normal speed in the daytime. There are over 600 muscles in a human body. Jaw-muscles on cheek teeth may develop an effort of 72 kilos.

A human body synthesizes about 100 grams of proteins during one hour. The brain of an adult male weighs 1375 grams, whereas the female brain weighs 1275 grams. The weight of the brain does not affect intellectual capacities of a person. Only four percent of brain cells work; the rest of them are kept in reserve. About a thousand of neurons die every hour. The speed of a nerve impulse on the reflex arch can reach 120 meters a second.

Mixed food usually stays in the stomach of an adult person for about six hours. The stomach usually produces about 1.5 liters of digestive juices on daily basis. The total square of the absorbing surface of the small intestine villi makes up to six square meters. A healthy liver processes 720 liters of blood every day.

The bronchial tree has 24 levels of embranchment. The total number of air vesicles (alveoli) in lungs reaches 300-350 million. The total square of the respiratory surface of two adult lungs is more than 90 square meters. The share of skin-breathing makes up about three or five percent of the entire respiratory system. It may reach 30 percent under extreme conditions.

The average lifespan of a spermatozoon is about 36 hours; an ovule lives for 12-24 hours. The total distance that spermatozoa have to cover during ejaculation is about 6.3-7.8 meters. Male sex glands start functioning at the age of seven. A male body is somatically and sexually mature when a young man turns 16-19 years of age. The psychological maturity, however, comes at 21. A woman produces about 400 follicles in a lifetime (13 follicles a year). The duration of a woman's menstrual cycle may fluctuate from 21 to 32 days.

The total number of thermal receptors in human skin may reach about 280 thousand. The minimum quantity of painful receptors is located in the area of cheeks.