A total eclipse of the Sun is just round the corner. It is due on March 29, 2006. Earth dwellers have been observing a total solar eclipse, an extremely interesting astronomical phenomenon, for a few thousand years. However, scientists became capable of explaining the essence of solar eclipse just recently. 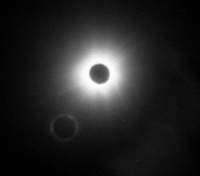 Still, modern civilized people, no matter how well-educated they may be, are likely to be filled with awe when suddenly he sees the whole world being plunged into darkness at midday and a “black hole” with a pearly otherworldly corona eats away the Sun.

All world religions pay special attention to the description of an eclipse. Normally, it would comprise a lucid god of the Sun fighting against the forces of Evil e.g. devils, demons, and a horrid dragon. Our ancestors would help the Sun overcome a terrifying black shadow by making a lot of noise – they would beat the drums and blow the horns, they would shake the rattles and fire their weapons at the demons. And the Sun would always gain the victory.

Actually, it is wrong to use the term eclipse with regard to the phenomenon of the Moon passing in front of the Sun. In precise scientific terms, it is an occultation. An eclipse takes place when an object passes into the shadow cast by another object. When the Sun is completely obscured by the Moon, the phenomenon is called a total eclipse. An annular eclipse occurs when the Sun and the Moon are exactly in line. When the Sun and the Moon are not exactly in line, and the Moon obscures only part of the Sun, it is called a partial eclipse. The generic term for a total, an annular and hybrid eclipse is a central eclipse. The reason why some solar eclipses are total and others are annular or partial lies in the elliptical nature of the Moon. The Moon’s orbit around the Earth is inclined at an angle of 5.2 degrees to the plane of the Earth’s orbit around the Sun (the ecliptic). Because of this, the Moon will only pass above or below the Sun at the time of a New Moon. A solar eclipse can occur only when the New Moon is close to the so-called nodes i.e. the points where the Moon’s orbit crosses the ecliptic.

The Moon’s orbit is also elliptical – the distance between the Moon and Earth can vary by approximately 6% from the average value. In other words, the apparent size of the Moon is sometimes larger or smaller than average, and it is this effect that leads to the difference between total and annular eclipses. The Sun lies about 400 times as far as does the Moon, and the Sun is also about 400 times the diameter of the Moon. As seen from Earth, the Sun and the Moon appear to be about the same size in the sky, around ½ of a degree in angular measure.

During a solar eclipse, the dark grey region to the right of the Moon is the umbra. The term designates the Sun completely obscured by the Sun. The small area where the umbra touches the Earth’s surface is where a total eclipse can be seen. The larger area is called the penumbra, in which a partial eclipse will be seen. During a central eclipse, the Moon’s umbra moves rapidly from the west to east across the Earth. The Earth is also rotating from west to east but the umbra always moves faster than any given point on the Earth’s surface, so it almost always appears to move in a roughly west-east direction across a map of the Earth (there are some rare exceptions of this which can occur during an eclipse of the midnight sun in Arctic or Antarctic regions).

The width of the track of a central eclipse varies according to the relative apparent diameters of the Sun and Moon. In the most favorable circumstances, when a total eclipse occurs very close to perigee, the track can be over 250 km wide and the duration of totality may be over 7 minutes. Outside of the central track, a partial eclipse can usually be seen over a larger area of the Earth.

This time around, on March 29th, 2006, the eclipse begins at dawn. The shadow will fall on to the Earth in the tropical forests of eastern Brazil near the Atlantic coastline. The umbra will move at a very high speed. Totality is expected to last only one minute over that area. After crossing the Atlantic Ocean, the umbra will start covering Africa’s shoreline, moving over Ghana to Togo to Benin and Nigeria. The umbra will reach the Sahara at the junction of the state borders of Nigeria, Chad and Libya. Totality will reach its peak over the region – 4 minutes 6 seconds. After passing over the Mediterranean and Turkey, the umbra will move across the eastern part of the Black Sea to cover the area over the entire Central Caucasus. Then the umbra will move across Elbrus and cover the plains of southern Russia. The shadow will reenter the Russian territory at the foothills of the Altai mountain range. Totality in that area will last 2 minutes only. In another 15 minutes the eclipse will finally shift to Mongolia where it will finally end at sundown.

Apart from being a rare a unique sight, an eclipse is a very impressive phenomenon to observe. According to those who have been in luck and saw an eclipse, it is something worth seeing at least once in a lifetime.