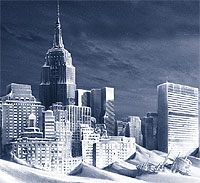 About 87 percent of Russians believe that the weather in January of 2006 was colder than usual in their regions. More than one-fourth of the polled Russian citizens said that they experienced health problems because of the cold. Therefore, pessimistic forecasts predicting even colder times on the planet sound quite trustworthy against such a background. Many media outlets both in Russia and abroad have already exposed their forecasts about the new Ice Age. Journalists paid special attention to the statements released by the chief of the Space Exploration Department of the Central Astronomical Observatory of the Russian Academy of Sciences, the supervisor of the Astrometria project of the Russian part of the International Space Station, Doctor of Physical Sciences, Khabibullo Abdusamatov.

The scientist particularly said that a global reduction of temperatures would hit planet Earth in the middle of the 21st century because of receding solar radiation. Mr. Abdusamatov told Pravda.Ru that the new Ice Age will start very slowly. According to the scientist, the process will gather pace in 2050-55.

Abdusamatov compares the imminent reduction of temperatures with Maunder's minimum of solar activity registered in 1645-1715 (named so in honour of the English astronomer of the 19th century, Walter Maunder), when all canals froze in Holland and severe cold forced many people to leave their settlements. “The coldest years of the middle of the 21st century will be warmer than at the end of the 17th century,” the scientist clarified.

Khabibullo Abdusamatov also explained the structure of solar activity cycles that last for 11 and 100 years. The scientist said that 11-year cycles do not affect the Earth's climate. Eighty-year cycles do not have much influence either, although 200-year cycles are much more powerful. The theory, the scientist told Pravda.Ru, was not considered a common scientific theory in the world. “The whole world has recognized the global warming theory, which pictures catastrophic situations in the future. I do not march in step with the world at this point. However, my theory has raised a certain interest in other countries. Hardly had I made a statement to RIA Novosti when I received several messages from scientists living in the USA, Iceland and other countries. They wanted to know more of my theory. They also want to know if I have delivered a detailed report on the matter and where it was published,” the scientist said.

The specialist also said that he delivered his first report about the solar cycles provoking global climate changes in June of 2004, at the 233rd symposium of the International Astronomical Union. The report did not contain any specifications of the dates and periods for the weather changes. The scientist revealed approximate dates in September and October of 2005. “No one has expressed serious objections,” Mr. Abdusamatov said.

However, the Dean of the Department of Physics of the Ural State University, Aleksei Babushkin, is certain that a global reduction of temperatures is categorized as a cycle and does not herald global catastrophes. “Temperature changes periodically occur in different parts of the planet. However, it is not an irreversible process. Nature controls itself – a continuing universal drop of temperatures will not happen. All that global cold and heat has been made up by American film directors,” Aleksei Babushkin said.

The specialist is certain that making long-term weather forecasts is impossible. It is nothing but guess-work: weather changes can be predicted for the time-period of several days only. As for the current unusually cold winter in Russia, Babushkin said that such chilly short-term periods occurs in Russia's Ural and Siberia once in 30 years.

Senior specialist of the Institute of Atmospheric Physics of the Russian Academy of Sciences, Pavel Demchenko, believes that an analysis of the average empirical evidence on Earth shows that the human civilization will most likely have to experience the global warming. The year 2005 set a record of the average temperature on the surface of the globe that has ever been registered during the history of scientific observations (since the middle of the 19th century that is). Demchenko said that there was a well-grounded scientific concept which models a situation when the global warming process may spontaneously change to a sudden drop of temperatures. The waters of the Atlantic Ocean may turn fresh as huge glaciers thaw. The phenomenon may interrupt the regime of the so-called oceanic warmth conveyer. Many warm currents, including Gulf Stream that currently heats the northern hemisphere, will change their directions. As a result, European temperatures may drop.

On the other hand, Mr. Demchenko could not explain the current severe cold in Moscow. “The decrease of climate differences between the equator and the pole may increase the possibility of anomalous weather phenomena. At present moment Russia experiences the so-called Arctic intrusion, when cold Arctic air moves from northern Ural to the European part of Russia. This is a weather pattern,” the scientist said. Demchenko acknowledges, though, that the global warming is not likely to lead to serious consequences. “The thawing of floating glaciers will not raise the sea level,” said he.

All conclusions about the imminent or ongoing global warming are based on the results of joint research conducted by the World Meteorological Organization and the UN inter-governmental climate change program. According to the results of the research, the average temperature on the surface of planet Earth raised by 0.6 degrees Centigrade during the 20th century. The calculations made by the proponents of the global warming theory show that the temperature will not raise by more than one degree only in the 21st century either. The most radical followers of the theory say that the emission of industrial gas will have a stronger influence on the planet's climate. The global temperatures, they say, will raise by two or even six degrees. No one gives any real evidence of such weather changes that could be caused with industrial gas emissions.

Khabibullo Abdusamatov's theory says that the temperature of the planet will drop by only one degree. Mr. Abdusamatov says that the climate changes by one degree there and back on a cyclic basis. It means that the reduction of temperature in the middle of the current century will be followed with a global warming. “There will be no fundamental change of the global climate,” the scientist emphasized. Such cyclic climate changes occur for 7,500 years.

Mr. Abdusamatov's theory corresponds with the results of the research about the increase of Earth's temperatures in the 20th century, which makes many scientists continue the trend of the future warming. Abdusamatov has made an opposite conclusion about the cold period, which is to follow the warm era. However, both the possible cold and warm weather periods are characterized with a change of Earth's temperature by only one degree Centigrade.

To crown it all, the conclusions of such a slight reduction of global temperatures will have to be confirmed. Specialists will conduct profound research at the Russian sector of the International Space Station in 2008. The works will be devoted to the change of time variations of the shape and the diameter of the sun. The results of the research will give scientists an opportunity to make precise conclusions about the radiance of the sun and its influence on Earth's temperatures in the middle of the current century, Khabibullo Abdusamatov said in an interview with Pravda.Ru.