200 highly developed civilizations hidden in distant galaxies of the Universe

The founder of the scientific search for extraterrestrial civilizations Frank Drake believed that a minimum of 200 highly developed civilizations were hiding somewhere in our Galaxy. His followers estimate the actual number ranges from 10 thousand to 1 million. It is a hell of a number. There has not been, alas, any news or signal from space during the 30-year search. However, extraterrestrial intelligence is not in contradiction to conservative scientific dogmas. 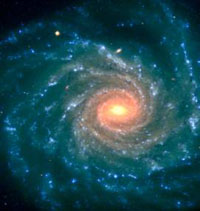 200 highly developed civilizations hidden in distant galaxies of the Universe

The world’s largest computer network is hooked up to SETI (Search for Extraterrestrial Intelligence). Anyone who downloads a computer program [email protected] will be able to process data provided by the world’s largest radio telescope located in Arecibo, Puerto Rico. The telescope receives signals from all over the Galaxy but has no time for digesting them on its own. More than 5 million PC’s all over the world are taking part in the project.

Most powerful telescopes were pointed at the sky to check for signs of life in the constellations of Tau Whale, Eridan’s Epsilon, and a spherical mass No13 in the constellation Hercules. So far the efforts to find any intelligence in space have ended in failure. NASA is launching a new project Cyclops worth $10 billion. A thousand telescopes will be installed at 15-kilometer intervals from one another. The telescopes will be tuned to the reception of signals traveling within a range of 1,000 light years.

The earth dwellers have repeatedly tried to draw attention to themselves by sending various messages and objects to deep space. Capsules containing the earth’s coordinates in Milky Way; basic physical constants and DNA code; recordings of music by Bach, and pictures of the Egyptian pyramids were dispatched to space aboard the spacecraft. No reply has come so far.

A radio signal from Earth takes tens of thousands of years to reach the nearest stars, and therefore it is pretty premature to show signs of impatience. Beside, there are 200 billion stars in the Milky Way alone. Time required for resolving a global problem will depend on progress made by microelectronics and technology of radio telescopes.

The Doomsday Theory says that any technological civilization is bound to destroy itself.

According to the Zoo Theory, aliens use our planet as a zoo. Establishing communication between them and us is strictly forbidden due to the experiment requirements. A milder version of the same story indicates that the so-called brothers in reason regard us as innocent children, and therefore it is pretty difficult to let us know that contact is established. A recent research by Canadian scientists shows that Earth is about 2 billion years younger that similar planets in other solar systems.

The famous astronomer Josef Schklovsky was one of the most active supporters of extraterrestrial civilizations. However, he changed his mind at the end of his life and arrived at a sad conclusion – man is all alone in the Universe. There are many skeptics who share the above point of view.

U.S. researchers Peter Word and Donald Brownley believe that a planet and its solar system should meet a number of tough requirements to become a place suitable for life not to mention intelligence. It is nearly impossible to meet all those requirements – a planet should be located in a belt where water is liquid; a planet should also be within a belt of gaseous giants to maintain it orbit; a large natural satellite akin the Moon is required to stabilize the pivot (no such satellites discovered in the vicinity of other planets); a special location in a galaxy, a special makeup of the crust, a favorable temperature range of a star etc.

Seth Shostak, a leading astronomer in SETI Institute in California , estimates that rapid progress in those fields will enable humankind to discover intelligent life in our Galaxy within 20 years provided that intelligent life does exist somewhere out there.

The search might prove useful in Mars and Europe , a large natural satellite of the planet Jupiter. Data obtained by several space probes indicate that the Red Planet has vast reserves of ice and ancient water. But Mars has no atmosphere. The diameter of Europa is just 4 times smaller than that of Earth. The satellite was discovered by Galileo in 1610. The probe Galileo obtained important data on Europa several years ago. The satellite is covered with thick ice layer over the ocean, which is 50 km deep. Perhaps Earth and Europa are the only places in the solar system with huge reserves of water. Besides, Europa has an atmosphere containing oxygen. Scientists still need to find out whether oxygen is biological by origin as oxygen on Earth.