The chip is the size of a post stamp, but it can replace a whole laboratory, its personnel, hundreds of test-tubes

A latest development of Russian scientists - a microchip that is capable of identifying hundreds of pathogenic bacteria and viruses, detect genetic mutations and people's disposition to certain types of cancer – has been recently certified. The supplementary device for the chip received a state certificate as well. 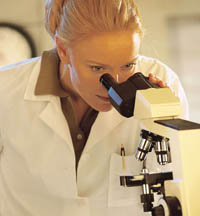 The officially acknowledged biochip became a significant accomplishment in terms of the international image of the Russian high-tech industry. The certificate marked the success of the 15-year work, which was started at the end of the 1980s. The creation of the Russian biochip, as they call the invention in foreign states, is directly linked with the now-deceased director of the Molecular Biology Institute of the Russian Academy of Sciences, Andrei Mirzabekov.

”A lot of scientists believed back in those years that it would be impossible to do this work. Andrei Mirzabekov believed that one should conquer the impossible. He thought that doing something possible was not interesting,” Doctor of biological sciences Viktor Barski said.

The idea to create a biological chip, the size and the working capacities of which would be similar to an electronic chip, occurred to three scientists of the world in Britain, Yugoslavia and the USSR. The Yugoslavian group was invited to work in the USA, although they failed to achieve any result at this point. The British scientist sold the idea to a diagnosticum-making company, which decided to put the work aside and wait for better times to come. When it became known that Russians found a shorter and more efficient way for success, the USA offered Mirzabekov to head a US center for biochips. The scientist accepted the offer, but he also managed to preserve the Russian research center too. Russian specialists had to work in two laboratories until 2001.

A biochip is a tiny little square on a shiny plate. The chip is the size of a post stamp, but it can replace a whole laboratory, its personnel, hundreds of test-tubes and dozens of various devices. The operation of the biochip is based on the laws of molecular biology.

”A robot applies microdrops of various constituents and probe molecules on the plate. These molecules are either DNA fragments or certain proteins – they can belong to bacteria, viruses, toxins, etc. The plates are then exposed to ultraviolet radiation: the drops are polymerized in trapping micro-cells. There can be up to 4,000 of them on a chip,” Dr. Alexander Zasedatelev said.

The laboratory used to make ten chips a day. Scientists developed a robot later, which increased the productivity to 70 chips per hour and simplified the pathogen-detecting process. Researchers add a fluorescent matter in the analyzed liquid (a drop of blood, plasma, etc). When the liquid is applied on the chip, molecules look for similar molecules on the chip and combine with them. The fluorescent matter makes viruses and defective genes shine. The identification can be performed easily, under a microscope. It is also possible to zoom and print the image of the analysis. The picture with fluorescent cells cheapens and simplifies very complicated analyses.

The Central Institute of Tuberculosis of the Russian Academy of Sciences has already tested the biochips. A biological analysis like that lasts from two weeks to two months in ordinary laboratories. It takes virologists mere hours to identify pathogenic organisms of such dangerous diseases as plague, cholera, smallpox. The biochip can diagnose leucosis very quickly, which is a very important aspect, for it gives doctors much more chances to save patients.

The biochip can also determine the quality of donor blood, typify bird flu cultures, which have raised global concerns during the recent several years, detect genetic mutations of a fetus, identify a person and perform a variety of other criminalistic analyses, and so on and so forth.

The biochip diagnostics is faster and much cheaper than other well-known, albeit expensive, methods as the polymerase chain reaction (PCR).  The Russian chip is 30 times less expensive in comparison with the chips of foreign production. A serial industrial production of the chip will make it even cheaper, as academician Mirzabekov believed. Russian biochips and the equipment for their analysis currently work in research labs of the USA, France and Korea.