Her most shocking prediction was made in 1980. The blind old woman said: “At the turn of the century, in August of 1999 or 2000, Kursk will be covered with water, and the whole world will be weeping over it.” 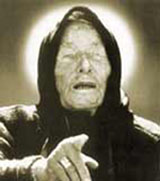 The prediction did not make any sense back then. Twenty years on, it made a horrifying sense. A Russian nuclear submarine perished in an accident in August of 2000. The sub was named after the city of Kursk , which by no means could have been covered with water.

Does the gift of foreseeing really exist?

Gone with a tornado

Vanga (Vangelia) Pandeva was born on January 31, 1911 . She died on August 11, 1996 . She lived in the city of Petrich , Bulgaria . She was buried in a churchyard of the Saint Petca Bulgarian Church in the Rupite region.

Vanga lost her sight when she was 12. She was swept away by a mighty tornado. Later she was found alive, covered with dirt and stones, with sand in her eyes. She became blind as a result.

Vanga started making predictions when she was 16. She helped her father find a sheep stolen from the flock. She provided a detailed description of a yard where the animal was being hidden by the thieves. Her powers of foreseeing took shape after she turned 30.

Many a statesman visited Vanga. Adolf Hitler called on her one day. He left her house looking rather upset.

The predictions
“Horror, horror! The American brethren will fall after being attacked by the steel birds. The wolves will be howling in a bush, and innocent blood will be gushing.” (1989)

Happened as predicted. The World Trade Center Towers in New York collapsed following terrorist attacks on September 11, 2001 . The WTC Towers were dubbed “Twins” or “Brothers.” The terrorists drove passenger planes –“the steel birds”- into the towers. “The bush” obviously relates to the surname of the current U.S. president.

“Numerous catastrophes and disasters will shake the world. The mentality of the people will change. They will be divided by their faith…” (date unknown)

Happened as predicted. Bad times have arrived. Something is happening to the mentality of the people. Out time is rife with catastrophes and disasters e.g. last year’s tsunami, which clamed thousands of lives. We might as well cite numerous terrorist attacks and ethnic riots

“We are witnessing the events of paramount significance. Two big leaders shook hands.

(manifest reference to Gorbachev and Reagan). But we have to wait for a long time before the Eighth One will come forth and sign a final peace agreement on Earth.” (January 1988)

The predictions are beginning to come true with regard to the Eighth One at the very least.

By the way, during the Yeltsin presidency, Vanga already hinted at the next Russian president though she never called him by the name. “It will be a totally new figure. Zyuganov and Lebed are ruled out.” The Eighth One has already arrived: Russia joined the Group of Seven. Now it is the G-8. Making peace all over the word should be the next step.

“Everything will melt away like ice yet the glory of Vladimir , the glory of Russia are the only things that will remain. Russia will not only survive, it will dominate the world. (1979)

Still has to come true. At the same time, Russia did survive. The prediction was made in Soviet times when just a few people were using the term “ Russia .” It remains to be seen which Vladimir Vanga referred to. There are three real candidates: The Prince Vladimir, Vladimir Lenin, and our current president a.k.a. the Eighth One.

“The trains will start flying in 2018. They will be powered by the Sun. Earth will take a rest since they will stop extracting oil.” (1960)

The prediction is about to come true. Scientists intend to extract helium-3 from the lunar soil. The plans regarding helium production on the Moon were made public a few days ago. Helium-3 is both a product of the solar activity and a fuel for nuclear reactors. Nuclear reactors will produce electricity to power “flying trains.”

A piece of advice from Vanga

“Never take on the fools. They are not so dangerous as they seem, do not try to change them. Morons can do you more harm. The can do something that will cause quite a stir among all the people.”