Friendship between man and dog rests on parental instincts 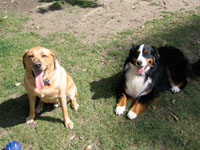 Friendship between man and dog rests on parental instincts

The ability to transfer that style of relations to other social partners e.g. pets or adult kinsmen could play an important role in anthropogenesis.

Emanuela Prato Previde and her colleagues at the Milan Institute of Psychology conducted a series of observations on the behavior of dogs and their masters in an unusual, stressful environment. At the beginning, the dogs and their masters in pairs were put in barely furnished rooms. Each room had a couple of chairs, a cup of water, an empty plastic bottle, two rubber balls, a toy with a rope attached to it, a toy with a squeaker, and a video camera that would record the experiment. Then the masters were ushered to another room where they could spend some time watching their pets suffer from loneliness. Then the masters were led back to their pets. After a while, masters left their pets for a longer period of separation. Finally, the masters and the dogs reunited.

The participants of the experiment comprised 15 men and 10 women. They were told by the doctors that the experiment was intended to supply information on behavioral events relating to the dogs. The humans were asked to behave in the most natural way. Contrary to the official statements, the doctors aimed to study the behavior of the dogs’ masters.

Every move of the “guinea pigs” was recorded and arranged in categories. The doctors counted up the strokes, pats, hugs, kisses etc. as they watched the masters and the dogs. The doctors paid special attention to words and phrases said by the masters.

The experiment showed that both men and women were using numerous behavioral rudiments that are normally used for communication between parents and young children. The words and phrases used by the masters were rife with repetitions, diminutives, terms of endearment and other characteristics of the so-called “motherly tongue.” Humans and “abandoned” animals did not frolic much after a long separation, which left them more stressed-out than the first time they were parted. On the other hand, both parties showed more affection and made a bigger fuss over each other.

The study was carried out for observation/description purposes. It did not produce any revelations in terms of statistics, no genes were switched off, no man-made viruses were inserted in the brain during the experiment. Still, the doctors believe that the results of the study present a serious argument in favor of a theory of symbiosis between a dog and a human being. The theory maintains that the symbiosis is originally based on a “parental” behavioral stereotype, which is transferred to new quadruped friends. Other facts can be used for proving the theory. For example, there is a custom to keep numerous and completely useless pets in some traditional cultures unaffected by civilization. In many cases humans treat their pets like their children; women were reported to even breast-feed them.

The ability to transfer the style of behavior, which was developed for communication with children, to other social partners could play an important role in the evolution of rational man. The levels of intraspecific aggressiveness dropped while cooperation skills shaped up during the anthropogenesis. The processes might have also led to smaller jaws and fewer teeth, chiefly the canine teeth, in the male primates. The male primates mostly use their canine teeth for fighting off rival males during a mating season. The males with canine teeth went out of fashion at the early stages of hominids’ evolution. Even the male species of the genus Australopithecus had medium-sized teeth. The trait in combination with strong sexual dimorphism (males are much larger than females) is regarded as a paradox by anthropologists.

The evolution of man had a pedomorhic element e.g. a skull of man looks more like a skull of a monkey’s offspring. There was a direct link between a relative enlargement of a cranium and a smaller size of the jaws and fewer teeth. The males with higher foreheads and fewer teeth were supposedly less aggressive and more sensible. Sexual selection might have made those traits permanent after getting hooked up to an old paternal instinct, those tender feelings shown by mammals toward their offspring. However, the above is just a piece of guesswork by the author of this article inspired by the story of the Italian psychologists.