There are several types of cloning. Biotechnologies have been practicing the molecular cloning for quite a long time. The method makes it possible to place additional inheritable genetic information in the DNA or virus cells. It is the molecular cloning, which allows scientists to produce insulin with the help of bacteria, or to make genetically-modified food. The molecular cloning laid the foundation for genetic therapy too. 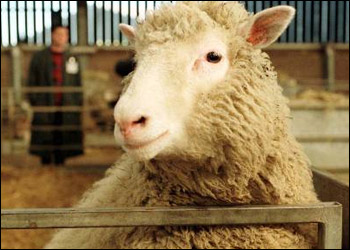 The reproductive cloning can be defined as the creation of an exact copy of an organism with the use of its genetic material. A donor nucleus possessing specific genetic information is placed in an ovule instead of its own nucleus. An ovule starts dividing and produces a genetically identical embryo. Such an embryo is capable of growing into an adult organism. This mechanism was used for the creation of the world-known sheep Dolly.

Nobel prize winner Hans Spemann suggested a “fantastic experiment” in 1938, when scientists determined that animals and plants' hereditary information was hidden in the cell nucleus. The scientist suggested taking a nucleus of a late embryo, of a young species or an adult organism and replacing the ovule's nucleus with it. Spemann conducted a successful experiment in 1902, when he received two organisms from two parts of a lizard's early embryo. The researcher presumed that it would be possible to make a full organism at later stages of development.

Biologists attempted to clone mammals' embryo cells back in the 1970s. Researchers Karl Illmensee and Peter Hoppe said that they had managed to create and grow cloned mice. It turned out later, however, that the results of their work had been fabricated.

Scientists Stice and Robl became the first researchers, who managed to clone a rabbit from an embryo cell at an early stage. They repeated the experiment successfully on other animals later. No one, however, succeeded to clone an embryo cell at a late stage of its development, not to mention a cell of an adult species.

A group of researchers with Ian Wilmut at the head from Scotland-based Roslin Institute proceeded to the cloning of sheep's embryos in the beginning of the 1990s. Wilmut was growing donor embryo cells in the cell culture. They bore some resemblance to stem cells, although they started reminding the cells of an adult organism afterwards. Wilmut used their nucleuses for cloning. Five lambs were made as a result of the experiment; two of them reached the age of eight or nine months.

In his next experiment Wilmut grew adult sheep's mammary gland cells in the cell culture. The cells that he selected from the culture were then used as a source of transplanted nucleuses. The biologist made 277 modified ovules in the experiment, but only one of them was developing into a healthy animal. The sheep, which was born as a result of the successful research, was named Dolly.

Wilmut's success produced an international sensation. Dolly was growing as a normal sheep and even gave birth to six lambs. Her existence proved that an animal organism could be derived from the genetic material of an adult species.

Roslin Institute specialists cloned other animals too. Sheep Polly was born in July of 1997 – the animal carried a human gene in its body. It became possible to clone pigs in 2000 – researchers hoped to use them for growing internal organs and tissues for transplantation operations.

However, in 1999 scientists noticed that Dolly's cells looked older than the ones of her natural-born fellows. Geneticists concluded that the genes adopted the age in the cloning process. Dolly's premature death brought up the issue of possible reprogramming of an animal's adult cell.

A lot of scientists hope to use cloning to create transplantable organs and tissues, which will not be rejected by the recipient's body, unlike other people's organs. Cloning is said to be helpful for developing valuable medications and for preserving endangered species. The use of cloning for agricultural purposes could yield highly productive cattle.

The company Clonaid has announced about the creation of three human clones before, although many researchers believed that the announcement did not deserve any attention. Evgeni Sverdlov, the director of the Molecular Genetics Institute of the Russian Academy of Sciences, had a negative attitude to the birth of the first human clone: “An ugly, defective being might be born in 99 percent of such cases,” said he. According to Sverdlov, animal cloning results testify to the fact that the clones age faster and suffer from uncharacteristic diseases.

The US parliament is considering an opportunity to ban human cloning experiments. A million-dollar fine and up to ten years in jail is said to be a punishment for breaking the law. The human cloning has already been banned in many countries, including Russia. Great Britain, however, allows growing cloned human embryos until they reach early stages of development.

A lot of scientists, including Alan Coleman, one of Dolly’s creators, stand against the human cloning. It would be immoral to proceed with the cloning of human beings after what the world learned about remote negative consequences of the cloning, Coleman thinks.

Legislations of many countries, unsolved ethical issues and a large percentage of animal cloning failures make scientists look for new biotechnological methods. However, the history of cloning continues.