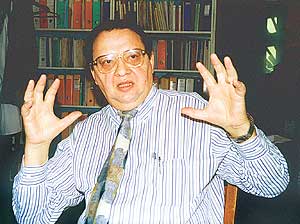 Unfortunately Russia does not appreciate creative researchers as the national riches; their prospects in the bureaucratic scientific society are vague (Vladilen Letokhov)

Vladilen Letokhov is a professor, doctor of physical and mathematical sciences, head of the laser spectroscopy laboratory at the Russian Academy of Sciences Spectroscopy Institute in the Moscow Region's town of Troitsk.

The scientist thinks the dissociation of the higher education system and scientific researches is the greatest problem. “Publications about prospective reforming of scientific institutions (the Ministry for Education and Science developed a “Concept of the Russian Federation's participation in administration of governmental scientific organizations”; the Russian Academy of Sciences' presidium considered the document spontaneously on September 14, 2004) sound rather dubious. Governmental officials are obviously anxious about the future of the Russian science and make some plans to solve the problem. Some of the ideas they suggest are actually vital, but they were to have been fulfilled in the 1980s. Others are disputable to my mind. In any case I would not state they want the Russian science to disappear once and for all.

Let us compare science in Russia and abroad. In other countries, best scientific researches of the Nobel Prize scale are mostly done at universities, while Russia's researches are done only at the Academy of Sciences. This phenomenon in the Russian system reveals defects of the world scale researches in this country. So, even though the innovations suggested by the Ministry for Education are painful enough they are at the same time vital.

The suggested measures are to raise the level of higher education and revive research institutes suffering from outflow of talented young researchers abroad. Another problem of the Russian science is the imbalance between young leading researchers and experienced administrators. In Russia, young creative researchers are not considered the national riches and their prospects in the bureaucratic scientific society are rather vague.

I often come across names of Russian researchers in popular international scientific magazines. These researchers work at foreign laboratories temporarily or permanently. Their achievements are mostly very interesting and considerably exceed the number of similar works done at Russian laboratories. Talented researchers from Russia are often very successful abroad. This is very good for the West but poses a real problem for Russia. Will any of these researchers ever get back to Russia? This may be possible only when Russia’s living standard gets better.

Russia may resort to China's experience in stimulating young researchers to get back home after graduating from foreign institutions or after working abroad. The Chinese long-term policy in education and science is reasonable. So, to reform the Russian science we must first of all stimulate young researchers to get back home after successful work abroad. Experience and achievements of young talented researchers are very important for Russia.

We may also hope that there are enough young talented researchers in Russia’s province. Great mathematician Kolmogorov worked a lot with youth in the 1960s and said that genuine men of talent are born everywhere in the country not only in elite families for whom higher education is more available.

Much is said about enlargement of research institutions. Indeed, it is easier to keep good libraries and good canteens at big research institutions. Today when informatics is on a proper level even an institution with 100-200 employees is strong enough to work on scientific problems. An institution with thousands of employees and having no scientific problem of the national level to study is traditionally a bureaucratic hierarchy in fact. This structure ruins ideas of young talented researchers.

Remember the USA's IBM where the complicated hierarchic structure resulted in several failures in the 1970-80s. At the same time, the universally known medicine and pharmaceutical giant Johnson & Johnson avoided such problems after it granted more responsibility and independence to hundreds of its subdivisions. Small research institutions also have the right to exist in case they are rather successful in their activity.

The documents on reforming Russia's science do not touch upon financing. The number of sources funding science is insufficient in Russia: the Ministry for Science and Education, the Russian Foundation for Fundamental Research, the Defense Ministry and some other foundations. It is important to have dozens of independent funding sources as well to support science and young researchers developing new fields. Foreign researchers also face this problem but it is not that great there.

Some problems of the Russian science have arisen from the research society and others are caused by the social environment. All of the problems require effective solution. Stimulation of young researchers to contribute to the Russian science is the most vital problem today. Experienced older researchers must be respected and supported indeed. But our science needs fresh forces for future successful development.”