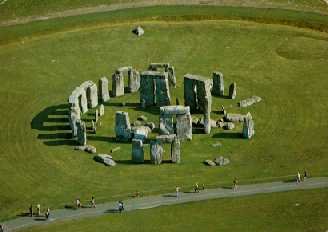 Alexander Ludov, Don student of local lore has made a strange discovery not far from the burial mound “Stone” within the basin of the Aksai river. He spotted several gigantic stones in the middle of a steppe. The overall stone structure resembled that of the British Stonehenge.

Actually, unlike the famous Stonehenge, this local construction consists of vertically erected massive rocks or megaliths. Long “Menhir alleys” made of stone stretch directly from East to West. According to results of a geological expedition, the site dates back to approximately 9 000 BC. Thus, these megaliths are much older than those megaliths located in Britain and other places.

-These rocks do not contain traces of limestone or any other kinds of rocks that are commonly found in our steppes. These rocks are made of quartz, - tells Alexander Ludov. – Today, we can only guess about the initial forms of the megaliths. For centuries, people have been looting the archaeological site. However, the damages had not been too drastic. This is the first discovery of megaliths in the European part of Russia. Back in the days, similar stone monuments have been discovered only in Caucasus and Siberia. And in all the cases, archaeologists claim, those megalithic constructions had been erected by some newcomers, not locals.

The fact that the Don megaliths represent the most ancient of archaeological sites, considers Alexander Ludov, allows us to presume that our civilization had in fact taken its roots from the Don region. Perhaps, ancient people erected such monuments to commemorate their deceased relatives. Though some present-day researchers consider that menhirs and cromlehs are not simply stone mounds but precisely engineered structures. It is also noteworthy to mention that such structures all over the world are made of quartz, a special kind of stone that is capable of radiating ultrasound waves.

“Scientists were able to determine that during spring and fall equilibrium radiation of the quartz stones tends to activate. As a result, the stones begin to “sing” within the ultrasound range of the changing frequency,” tells Alexander Dmitrievich. “Perhaps, that is the reason why quartz is used for construction of such sacred shrines. However, what exact knowledge our ancestors possessed about power of stones and why they erected menhirs and cromlehs in the first place will remain a mystery forever.

Unfortunately, just like many ancient relics, which remain under open air, Ludov’s find cannot be protected against vandalism. Perhaps, in a few centuries there will be nothing left of the Don Stonehenge.