The great ancient Indian epic, the Mahabharata, contains numerous legends about the powerful force of a mysterious weapon

The archaeological expedition, which carried out excavations near the Indian settlement of Mohenjo-Daro in the beginning of the 1900s, uncovered the ruins of a big ancient town. The town belonged to one of the most developed civilizations in the world. The ancient civilization existed for two or three thousand years. However, scientists were a lot more interested in the death of the town, rather than in its prosperity. 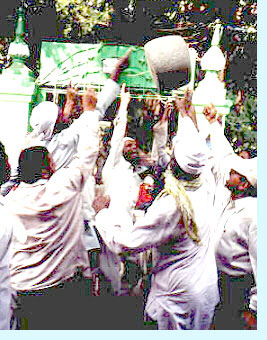 Researchers tried to explain the reason of the town's destruction with various theories. However, scientists did not find any indications of a monstrous flood, skeletons were not numerous, there were no fragments of weapons, or anything else that could testify either to a natural disaster or a war. Archaeologists were perplexed: according to their analysis the catastrophe in the town had occurred very unexpectedly and it did hot last long.

Scientists Davneport and Vincenti put forward an amazing theory. They stated the ancient town had been ruined with a nuclear blast. They found big stratums of clay and green glass. Apparently, archaeologists supposed, high temperature melted clay and sand and they hardened immediately afterwards. Similar stratums of green glass can also found in Nevada deserts after every nuclear explosion.

A hundred years have passed since the excavations in Mohenjo-Daro. The modern analysis showed, the fragments of the ancient town had been melted with extremely high temperature – not less than 1,500 degrees centigrade. Researchers also found the strictly outlined epicenter, where all houses were leveled. Destructions lessened towards the outskirts. Dozens of skeletons were found in the area of Mohenjo-Daro – their radioactivity exceeded the norm almost 50 times.

The great ancient Indian epic, the Mahabharata, contains numerous legends about the powerful force of a mysterious weapon. One of the chapters tells of a shell, which sparkled like fire, but had no smoke. “When the shell hit the ground, the darkness covered the sky, twisters and storms leveled the towns. A horrible blast burnt thousands of animals and people to ashes. Peasants, townspeople and warriors dived in the river to wash away the poisonous dust.”

Astounding mysteries of India's ancient times can be found in the town of Shivapur. There are two enigmatic stones resting opposite the local shrine. One of them weighs 55 kilograms, the other one is 41 kilograms. If eleven men touch the bigger stone, and nine men touch the smaller stone, if they all chant the magic phrase, which is carved on one of the walls of the shrine, the two stones will raise two meters up in the air and will hang there for two seconds, as if there is no gravitation at all. A lot of European and Asian scientists and researchers have studied the phenomenon of levitating stones of Shivapur.

Modern people divide the day into 24 hours, the hour – into 60 minutes, the minute - into 60 seconds. Ancient Hindus divided the day in 60 periods, lasting 24 minutes each, and so on and so forth. The shortest time period of ancient Hindus made up one-three-hundred-millionth of a second.