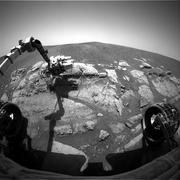 Associated Press reports that researchers evince great interest in Martian stone pictures taken by the Opportunity Mars rover. Even though the vehicle has obtained much information, experts still cannot define what exactly they see on the pictures.

The stone with layer structure called El-Capitan was defined as the main goal of the research after investigation of the rock yields traced by the Mars rover. Scientists still cannot determine the stone's origin. It is suggested the stone may belong to the effusive or sedimentary rocks. It is not ruled out that the stone structure is a result of weathering or mineral formation growth.

Meanwhile, programmers from the Microsoft laboratory in Cambridge say they have produced 3D images of the Martian surface using the pictures taken by the NASA device. For that, Antonio Criminisi and Andrew Blake employed the software developed for making 3D images out of two-dimensional pictures. As a result, the researchers made a short film allowing to see a 3D picture of the Martian surface without special glasses. Viewers can move about the 3D image with the help of a computer mouse or a joystick.