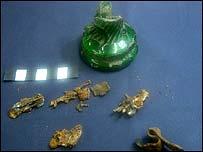 A reminder of the dark past has been discovered in the course of foundation disassembly of a rural house in Navenbi village in Lincolnshire.

Glass bottles containing bent pins, human hair and perhaps, even urine were supposed to protect the house and its inhabitants from evil. The fragments were buried sometime around 1830. This means that fear of the dark forces remained for much longer than is commonly considered.

The discovery happened accidentally in the course of reconstructing the house. Back then, the find did not impress anyone. Several glass bottles were simply put away. The actual meaning of those vessels was not established until they were brought to a meeting organized by the Department of Archaeology of Lincolnshire.

Most likely, the actual bottle served as an ink-pot or a glass candleholder. It was slightly damaged during excavations. However, all ingredients were well preserved. According to one of the hypotheses, the pins were soaked in urine in order to make witches feel pain when urinating. The bottles were meant to ward off evil spells, thus reflecting them onto the one who cast them.

In the end of XVI-XVII centuries Britain endured “witch hunt”. Hundreds of women were persecuted for allegedly practicing black magic. Majority of witches did not burn at the stake but were hung.

There were several ways to protect one's family or house from evil. Some buried one shoe right underneath their doorsteps. Others, immured cats into their houses.
Such vessels, often made of stone, were especially common in the beginning of XVII century. The bottle from Navenbi however dates back to 1830, to the time when such beliefs should have been forgotten.