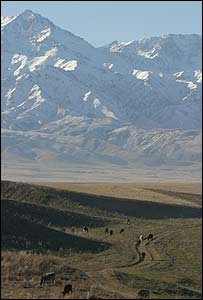 A rather unusual construction site is located in Southern Kazakhstan region, by the foothills of the mountain Kazigurt, along the Chimkent-Tashkent freeway.

A monument of the Noah's Arc is being erected there. According to the local legend, the Biblical prophet has moored to this particular place, aside from the Mount Ararat.

While not denying the official version of the Great Flood, local authorities decided to use the legend in a rather practical way.

I have been told the legend of the Mount Kazigurt by Chimkentsky journalists during my recent trip to the Kazakh-Uzbek border.

Mount Kazigurt is 1776 meters high. It is situated in Northern spurs of the entire complex of Talassky Alatau. Local residents have always considered the Mount sacred. According to the legend, Nukh-Baygambara (as Kazakhs call Noah) has moored to this particular region a long time ago.

Kazakh historians and archaeologists have never taken the legend seriously. Numerous poets however have been constantly attempting to explore the truth hidden in it. Authorities of the Southern Kazakhstan decided to focus their attention at the practical aspect of the myth.

“Taking into account the actual ethnographic value of this material, regional authorities decided to not only satisfy interest of the aksakals but to derive certain practical benefits as well,” commented press secretary of the regional administration Kenes Ismailov.

24 million tenge [local currency] (more than 165,000 USD) have been allotted from the regional budget for construction of a tourist complex “Kazigurt.” A multileveled observation site is being constructed along a narrow freeway Chimkent-Tashkent, right at the foothills of the Mount Kazigurt. Its peak will be crowned with the Noah’s Arc. One can observe the mountain and witness a magnificent view of endless Kazakh steppes from here. The observation facility will also include several restaurants and souvenir shops.

Authorities expect that Kazigurt's surroundings to appear quite attractive to numerous tourists worldwide. However, nobody is trying to disprove the initial story regarding the Biblical prophet's travels.

“An attempt to provide scientific evidence in order to prove existence of the Bible or the Talmud appears to be rather absurd. Nobody here is trying to prove or disprove anything. It isn't our main goal to make everyone aware of the fact that Noah did in fact moor to the mount Kazigurt. Besides, we don't even know the exact date of the Great Flood,” states Kenes Ismailov.

Journalist Marat Absementov recalls the first time he heard the legend of the mount Kazigurt. It happened 20 years ago. “I heard how two men, an Armenian and a Kazakh, arguing about the exact location of the Arc's mooring. The Kazakh was from Kazigurt. They turned to me with a plea to be their judge to announce the final verdict. So I said to the Armenian, 'Have you ever seen airplanes flying above Ararat?' 'Yes,' answered he. 'No airplanes fly near Kazugurt,' I said in return. Pilots observe some sort of magnetic anomaly in that region, which causes all controls in their airplanes to malfunction.”

Perhaps, there is some truth to the words of the locals regarding some supernatural powers of the mountain.

To see the pictures for the report go to
http://www.newsteam.ru/reports/index.html?4,7,1