The Master of Lightning 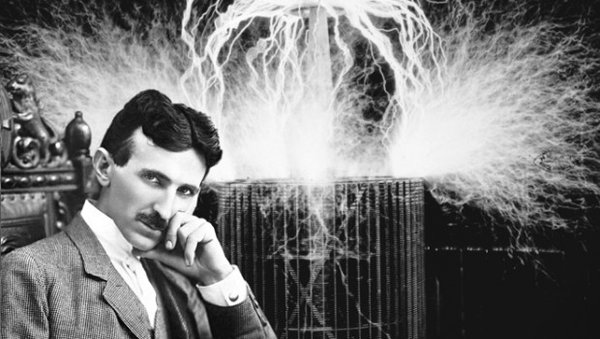 A lot of people consider him to be the greatest inventor in history. He discovered alternating current, fluorescence, wireless transfer of power, remote control principles, he built a sun-powered engine, and a lot of other things. All achievements of the up-to-date electronic industry would be impossible without his discoveries and inventions.

The experiment was very dangerous in its grandeur. The tower was tens of meters tall, it was topped with a large copper hemisphere. The whole construction produced lightning and sparks. The lightning was accompanied with the roar of thunder, which could be heard everywhere at the distance of 15 miles around. People in streets were shocked to see sparks between their feet and the ground, horses were struck with electroshock over horseshoes.

The man, who arranged that electric extravaganza in 1899, was not intended to frighten people at all. His goal was absolutely different, and it was achieved: 200 electric lamps flashed up everywhere at the distance of 25 miles far from the tower. The electric discharge was transferred without any wires. The man's name was Nikola Tesla. Mark Twain, a friend of his, called him the Master of Lightning. Nikola Tesla was obsessed with his work. He worked very hard, sleeping only for four hours. In addition to his study of the electric technology, Nikola Tesla was a linguist, he wrote poems, he could fluently speak eight languages, he knew music and philosophy very well too.

Nikola Tesla was born on July 10th, 1856 in Croatia. He was the fourth child in the family of a Serbian Orthodox priest. From the age of five, Nikola started suffering from unusual phobias and fixed ideas. His brain was filled with fantastic visions. He read books at nighttime, he often put himself in a trance, getting totally weak with exhaustion.

In 1880, when a student of the Prague University, Nikola Tesla was struck with the idea of making a induction alternator. Tesla shared his thoughts with professor Peshl, and the latter concluded that Tesla's idea was totally delirious. Yet, such a conclusion inspired Nikola even more, and a working model of the alternator was built in 1882.

Nikola thought that the only way to let the world know of his invention was to discuss it with Thomas Edison. Tesla sold everything to buy a ticket to board a boat in order to cross the Atlantic Ocean. He arrived in New York in 1884. Thomas Edison was four years Nikola Tesla's senior, although he was at the height of his fame back in those years. A carbon microphone, an electric lamp, a phonograph, a dynamo machine made Edison a millionaire. Yet, all Edison's electronic works were based on the direct current. Thomas Edison sensed that Nikola Tesla was his competitor. Yet, the American scientist offered him a job at his company. Working for Edison, Tesla did not stop working on his own alternating current system project. A patent was granted for the new invention in October of 1887.

That was a start of a "cold war" between the two inventors. Thomas Edison started criticizing Tesla's alternators, although he eventually agreed to test the new system at his own enterprise. Edison even promised that he would pay Tesla $50 thousand, if he managed to electrify one of his factories with alternators' help. Edison was sure that it was impossible. Tesla prepared 24 types of his device and fulfilled the task. The economic effect of that surpassed all expectations. However, Edison refused to pay the Croatian scientist, he just told him that it was a joke.

Nikola Tesla could not stand such a joke, the two inventors quarreled, and Tesla soon found himself with no job, and no house. In April of 1887 Tesla opened his own firm Tesla Electric Light Company. On May 16th, 1888 Tesla made a report and demonstrated his invention at the American institute of electronic engineering. Millionaire George Westinghouse, the inventor of the train air brake, was present in the hall as well. Westinghouse was astounded with Tesla's speech. He offered a million dollars and royalties to the Croatian inventor for his patents. The company Westinghouse Electric realized Tesla's developments, having built a hydro-electric station at Niagara Falls.

After Nikola Tesla became financially secure, he continued on his scientific quest anyway. In 1888 he discovered the phenomenon of the revolving magnetic field, and built electric generators of high and ultrahigh frequencies. In 1891 he created a resonance transformer, which was capable of producing high-frequency voltage with an amplitude of up to several millions of volts.

The mentioned experiment with electricity in the air impressed John Pierpont Morgan - one of the richest American bankers of that time. He invited the Croatian engineer to move over to New York for the implementation of the grand project - the construction of a wireless broadcasting tower. Morgan assigned $150 thousand (this sum was equal to tens of millions of dollars nowadays) and 200 acres of land on Long Island. The tower was 57 meters high, it was topped with 55-tonn metal dome with 20 meters in diameter. The incredible tower was launched in 1905 and produced an amazing effect. Newspapers wrote that Tesla lit the sky thousands miles around. That was a triumph.

However, Marconi broadcast a radio signal across the Atlantic Ocean in 1900, which made his communication system rather perspective. Nikola Tesla built the first wave wireless transmitter in 1893 (the US Supreme Court confirmed Tesla's priority in the invention of the radio in 1943). Yet, Tesla confessed to Morgan that he was not interested in working on a communication system. Tesla was interested in inventing a way to transmit power to any spot on the planet. Morgan stopped cooperating with Tesla, because he wanted to have a communication system. Banker Morgan stopped funding Tesla's works because of his weird statements too, in which the scientist said that he was allegedly in contact with alien civilizations.

Nikola Tesla was a strange person indeed. He dreaded germs, he constantly washed his hands with soap, he asked for up to 18 towels daily in hotels. If he saw a fly crawling on his table at dinner, he made waiters bring him new dishes. When checking in hotels, he always insisted on housing him in a room, the number of which would be divisible by three. Nikola Tesla's phobias and fixed ideas combined with his amazing energy. Walking along a street, he could somersault out of the blue. He would often walk in parks, reciting Faust, and brilliant technical ideas would dawn upon him at such moments. On the other hand, the scientist had an unexplainable foresight gift. He once saved his friends' lives, when he saw them off on a train: the train derailed, and a lot of passengers were either killed or seriously injured. He once stated that he could break planet Earth into pieces, he just needed a good vibrating device for that. It is not ruled out that Nikola Tesla grasped resonance secrets, but that power eventually resulted in ill fame for him, although he was a gentle and peace-loving man. Well, there were a lot of sentimental man-haters too.

In 1930s Nikola Tesla worked in RCA corporation, developing secret projects for the defense industry. Those projects included wireless transmission of power, the creation of resonant weapons, attempts to control time. There are a lot of rumors about those works, and it is practically impossible to separate truth from fiction nowadays.

Nikola Tesla died in his laboratory in 1943. He died as a poor man: all millions that he managed to earn were spent on the unsuccessful project of the giant broadcasting tower. It seems that the world was not ready for his discoveries. In the 1930s Tesla refused to accept the Nobel Prize that was awarded to him and to Edison. Until his dying day, Tesla could not forgive the American inventor for his fainthearted deceit. Tesla was desperate after prestige, which would allow him to obtain money for his research, so he caused considerable damage to himself, when he turned the Nobel Prize down. A lot of his diaries and manuscripts disappeared for good: some people believe that Nikola burnt them all in the beginning of WWII, after he came to conclusion that the contents of his manuscripts was too dangerous for the unreasonable mankind.

Text books on physics usually mention the only thing about Nikola Tesla - a transformer. If it is Heaven that sends men of genius on Earth, one may assume that Heaven obviously made a mistake with Nikola Tesla.

"Rays of Death": Who stole them?

On being an Orthodox Christian

Who are the Ukrainians in your Neighborhood?
20:05
Who are the Ukrainians in your Neighborhood?
19:57
Russia will use all of its military potential to counter Western arms supplies to Kyiv
19:18
German tanks with crosses on them disturb Russian genetic memory like nothing else on earth
18:34
Biden changing strategy on Ukraine to reach diplomatic solution with Russia
17:36
Consequences of NATO's possible supplies of fighter jets to Ukraine get clear
15:16
Ukrainian forces suffer heavy losses while trying to cut across Dnieper
13:35
USA's next step is to suppress European economies
12:52
Victoria Nuland turns herself in about Nord Stream blasts
12:28
Moscow wants to push Ukrainian troops away from Russian territories
19:55
US eco activist arrested for walking calf on Red Square
РусскийDeutschFrançaisPortuguese