Presently, the Russian Navy has three Borei class submarines. They are nuclear-powered Yury Dolgoruky cruiser of the Northern Fleet, and Alexander Nevsky and Vladimir Monomakh of the Pacific Fleet. 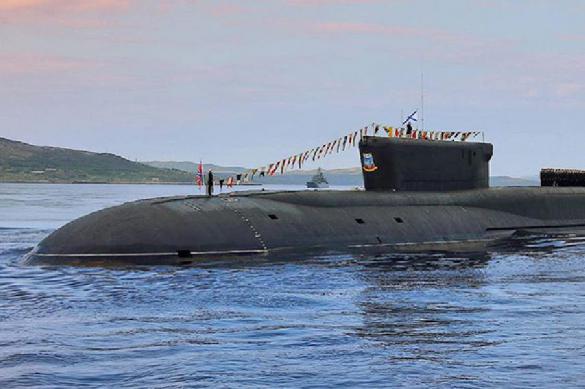 Borei class submarines can be as long as 170 meters long, up to 13.5 meters wide, and a have displacement of 24,000 tons. They can submerge to a maximum depth of about 480 meters and develop an underwater speed of about 30 knots. The submarine can work autonomously for 90 days. The crew counts 107 men, of whom 55 are officers.

The main weapon of Borei submarines is the intercontinental ballistic missile Bulava (RSM-56) - the sea version of the Topol-M ICBM SS-27, which carries from six to ten warheads with a capacity of 100-150 kilotons. Borei A class submarines can carry up to 20 ballistic missiles compared to 16 missiles of the previous generation sub. The missile is 12.1 meters long, it weighs a total of 36.8 tons and has a diameter of 2.1 meters (including the starting container).

One Borei can carry from 120 to 200 hypersonic maneuverable warheads. The range is more than 8,300 kilometers. A missile can be launched both on the move and from under the Arctic ice. The Bulava missile can conduct evasive manoeuvres after launch and use various countermeasures against interception. The missile has enhanced protection from both physical and electromagnetic impact, which ensures safety when reaching designated targets.

Borei class submarines have the compact and effective hydrodynamic hull to reduce broadband noise. It also uses the motor pumping thrust to reduce noise, develop a higher tactical "silent speed" and increase manoeuvrability. This makes the detection of the submarine more difficult.

Anti-submarine warfare experts believe that Russia is the only country in the world that can build an atomic submarine capable of evading US radars.

A Borei submarine can detect targets at distances 50 percent farther in comparison with US Virginia class submarines. The internal system of the submarine is a complex of electronic devices that ensure communication, target detection and a number of auxiliary functions.

Borei submarines are equipped with OK-650 nuclear reactor, a nuclear power plant steam turbine. They are Russia's first submarines that operate on the single-shaft pumping jet propulsion unit  instead of the dual propulsion system for high performance. In addition, these subs have two outboard thrusters and retractable horizontal bow planes to increase manoeuvrability.

US experts say that the Borei submarine is an impressive platform based on finest modern submarine technologies, including state-of-the-art sound attenuators and jet engines similar to those used at US Virginia submarines. Business Insider put Borei class submarines on the list of eleven  dangerous arms systems used by the Russian military.

In total, the Russian Navy operates as many as 70 submarines of various classes. They use most advanced technologies of the Russian defense industry, such as special steel alloys and titanium for enhanced stealthiness, reliable underwater missile launchers and sophisticated sonars.

Borei class submarines will give the Russian Navy an opportunity to resume strategic patrols in southern seas that have not seen a Russian missile submarine for about 20 years.