A radioactive isotope one billion times older than the Universe!

A radioactive isotope one billion times older than the Universe!
An international team of researchers, including six scientists from the Faculty of Science and Technology of the University of Coimbra (FCTUC), was able to measure for the first time the longest average lifetime of a radioactive isotope recorded by a device of measurement.

This extraordinary fact is published (April 25), as the main piece on the cover, in Nature, the most prestigious of all scientific journals. The isotope in question is Xe 124 and its average lifetime is approximately one billion times older than the Universe.

The Universe is about 14 billion years old, a period of time inconceivable when compared to the scale of human life. As if that alone did not cause enough amazement, there are radioactive isotopes (unstable elements that change over time emitting radiation) whose average life happens on scales much greater than the existence of the Universe itself.

"The fact that we can directly measure such a rare process as this demonstrates the extraordinary scope of our measurement system, even when it was not made to measure these events, but rather dark matter," stresses José Matias, coordinator of the Portuguese team in this effort international and researcher of the Laboratory of Instrumentation, Biomedical Engineering and Radiation Physics (LIBPhys) of FCTUC.

In fact, this measurement was only possible thanks to the XENON1T system, the most sensitive instrument ever produced by mankind for the detection of dark matter. It is installed in the National Laboratory of Gran Sasso (Italy), the largest underground laboratory in the world, under 1300 meters of rock to shield the system from cosmic rays existing on the surface.

The study published by Nature shows that, after all, "XENON1T was also able to measure other rare physical phenomena, such as double electronic capture. In this case, the nucleus captures two of the electrons that orbit it in the atom, transforming two of the protons that constituted it into neutrons and emitting radiation in the form of two neutrinos. The energy released in this process forms the signal that the system registers, despite the extreme difficulty in being detected by its rarity, and can be generally masked by the omnipresent "normal" radiation ", affirms the also vice president of the Higher Institute of Engineering of Coimbra (ISEC).

Only with the detailed knowledge of the sources of radiation recorded by the detector was it possible to observe 126 events of double electron capture of the isotope Xe 124 and thus to determine for the first time its average life time of 2.5 x 1022 years (25 thousand millions of billions of years). This is the longest physical process ever measured directly by mankind. In fact, there is a register of phenomena with a longer average life (isotope Te 128) in the Universe, but that was inferred indirectly from another process.

For the time being, it is not possible to predict the implications of this discovery that opens new horizons in human knowledge.

The XENON consortium consists of 160 scientists from 27 research groups from the US, Germany, Portugal, Switzerland, France, the Netherlands, Sweden, Japan, Israel and Abu Dhabi. Portugal has been a partner in this collaboration since its inception in 2005 through the LIBPhys team. 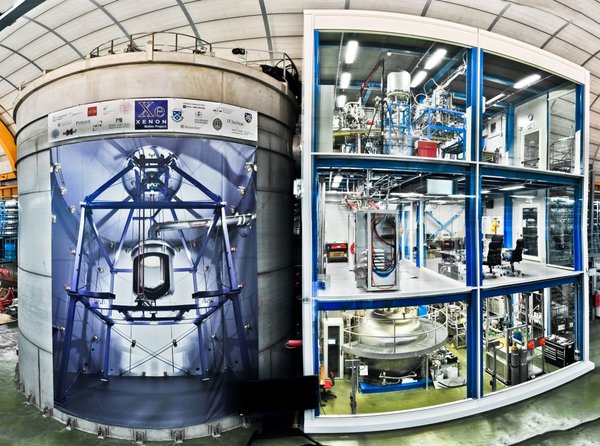