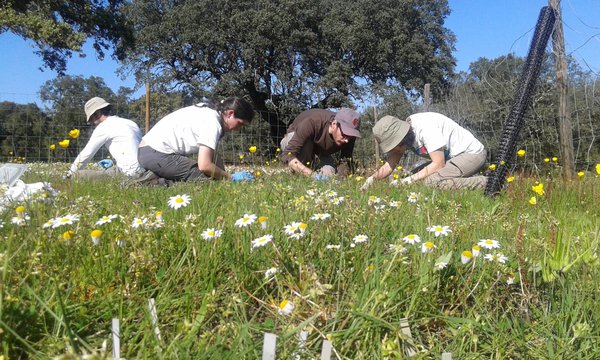 Extreme weather events are going to be more frequent and longer lasting, and farmers will have to adapt, finding new forms of agricultural and agroforestry management

Extreme weather events "are going to be more frequent and longer lasting, and farmers will have to adapt, finding new forms of agricultural and agroforestry management in order to make this sector more resilient to climate change," says scientist José Paulo Sousa, from the Center for Functional Ecology of the Faculty of Science and Technology of the University of Coimbra (FCTUC), coordinator of a team of Portuguese researchers participating in the international study ECOSERVE, which is evaluating the effects of climate change on soil biological processes.

A measure to mitigate the effects of extreme weather events, including prolonged periods of drought, reveals the initial results of the study, involves the use of cultivable varieties of plants with the most suitable characteristics to promote the sequestration of carbon in the soil, in order to increase the efficient use of water and nutrients. Higher carbon content in the soil implies a greater ability of the soil to retain water and make it available to the plants, so less is the need for watering.

The scientific work, published in the journal "Journal of Applied Ecology", also proved that the type of crop practiced influences the sequestration of carbon in the soil. According to the researchers, organic farming systems, systems where the use of chemicals is very low and where residues from one crop are used as a source of organic matter for the next crop, result in higher soil carbon stocks than cultivation.

This fact, explains José Paulo Sousa, "is closely related to the characteristics of the species cultivated, especially with the ease with which the residues of these species decompose and are later incorporated into the soil", that is, "we have species or varieties that influence in a way the quantity and quality of the carbon stocks in the soil. '

Through a global meta-analysis, complemented with field measurements, the team related the 'characteristics of different species cultivated with the responses of the carbon stocks in the two types of cultivation, having found significant relationships between the presence of species that cause residues of the more recalcitrant crops, normally used in organic crops, and higher carbon stocks, "notes the FCTUC professor.

These findings are relevant because 'they provide clues to possible measures to mitigate the effects of climate change on agriculture. By using varieties of arable species with the appropriate characteristics, farmers can mitigate these effects by increasing the carbon stock in the soil, thereby increasing the efficient use of water and nutrients, " concludes José Paulo Sousa.

The ECOSERVE study involves, in addition to the team from the University of Coimbra, researchers from Spain, France, the Netherlands, Sweden and Switzerland.