In the spirit of positive thinking, for the benefit of all the citizens of the Planet - I propose the "Green Africa" project. 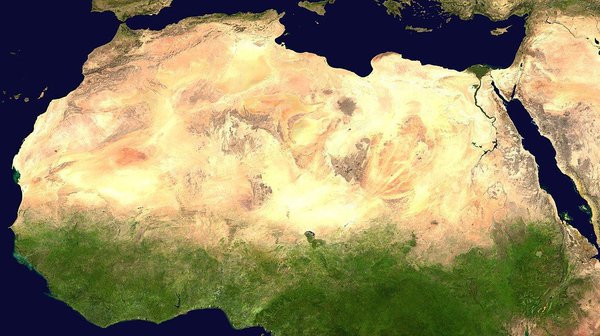 The mountain relief  (where applicable) will not be an impediment for the irrigation  because the pumps send water under pressure at any distance. So, initially, there will be a big effort of pumps in order to raise the water to  the  level of the mountains, then there will be a fall of the water drop and the pump effort will be small (so, the energy consumption will be small).
For desert areas of low height (such as lowlands and plains) it is possible to send the water THROUGH  FALL (DESCENT) as follows:

- high towers for water will be built. The huge pumps will send water to the interior of these towers and fill them (with water). From these high towers will start pipes  (from aluminum) to the farthest desert territories.

After a persistent initial irrigation (perhaps a few months), the sand in the desert will absorb the water (received through the pipes), then it will become WATER SATURATED, then it will eliminate some of the water absorbed in the form of vapors, and these vapors will rise to sky and will form CLOUDS.  The appearance of clouds is equivalent to the appearance of the first rains in the desert.

Then the rains will be more frequent, there will be a water circuit in the nature, it will appear  rich vegetation in the desert and very frequent rains, and, slowly but SURELY the whole of Africa will become green, meaning it will have a very rich vegetation on the whole territory: from the Mediterranean Sea to the Mull of Good Hope, from Cape Verde to the Mull Guardafui. In order to speed up the process of the appearance of vegetation - someones will seed (spread) grass seeds and lucerne seeds on irrigated surfaces.

At that time pumps will no longer be needed.
The cost of this project is between $ 20 billion and $ 30 billion.
I hope that the human rationality defeat  selfishness, greed, warlike spirit and lust for international power.

Author`s name Contributor submission
15:02
Viktor Bout says he did not come across Russophobia in US prisons
12:02
Massive fire burns OBI hypermarket at Mega Khimki Shopping Mall to the ground
16:48
US basketball player Brittney Griner exchanged for Russian entrepreneur Viktor Bout
16:31
Zelensky believes Ukraine conflict may end in 2023
20:46
The West is expecting, but not pressing Russia-Ukraine talks
18:27
Putin: The threat of the nuclear war is rising, why deny it
17:17
Ukraine modenises Soviet Tu-141 Strizh drones
15:24
Ukrainian combat drones capable of flying at speed of sound may strike Siberia
14:35
Russian Army continues successful offensive in Krasny Lyman direction
20:56
UK and USA could be part of drone attacks on Russian military airfields
Polish writer shocked to find out Russians will not rise to topple Putin