A working prototype of the "unreal" fuelless engine EmDrive, the principle of operation of which is impossible to explain from the point of view of conservation laws, was shown on Chinese television channel CCTV-2. 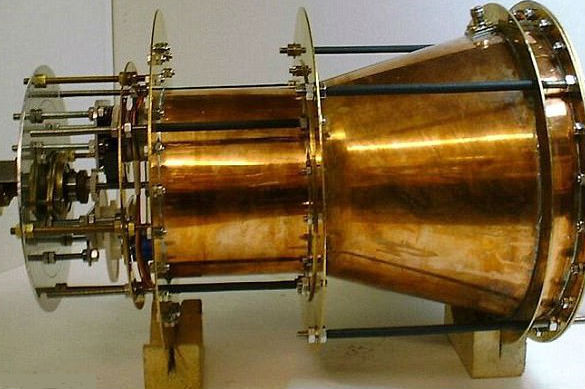 The video of the allegedly working engine was shown by the Daily Mail, which called the video a propaganda piece. Chinese scientists have not disclosed any technical details about the work of the prototype.

The engine, if it is real, can cut the time required for a flight to Mars to ten weeks. A power plant based on the EmDrive engine would make it possible to reach the edge of the solar system in a few months, rather than decades.

Chinese scientists said in December 2016 that the prototype of the EmDrive engine was tested on board the Tiangong-2 space laboratory. The scientists did not clarify any details, though.

NASA scientists have been trying to develop the EmDrive engine for many years, but they have not been able to build a working model. Judging by publications in profile magazines, EmDrive develops a thrust of 1.2 milli nylons per kilowatt in vacuum.

Reviewers could not find any errors in the design of either the test rig or the unit, while the authors of the work did not find retroactivity that responds to the reactive thrust developed by the EmDrive (in accordance with the law of conservation of momentum).

The EmDrive engine, which looks like a bucket lying on its side, consists of a magnetron that generates microwaves and a resonator that accumulates the energy of their oscillations. The chosen design allows, according to engineers, to convert radiation into traction, which fails to correspond to conservation laws.

The first working prototype, developing an effort of 0.02 N, was introduced in 2002 by British research company Satellite Propulsion Research. The Chinese North-Western Polytechnic University developed a prototype in 2008-2010, which could develop an effort of 0.72 N. In 2013-2014, the engine was tested at NASA's Eagleworks laboratory at the Johnson Space Centre. In the course of the tests, an anomalous result was obtained - a thrust of about 0.0001 N.