Asteroid Apophis has one in 100,000 chances to strike Earth

The huge nearly 400-meter wide asteroid Apophis is still on a list of hazardous near-Earth objects (NEOs), regarded as a potential threat to our planet. However, new calculations made by NASA's Jet Propulsion Laboratory (JPL) scientist, show that Apophis' odds of Earth impact are lower than previously estimated. 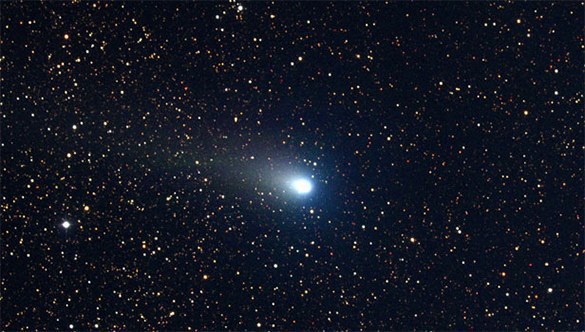 "We cannot yet exclude the possibility that it could impact our planet, but we can calculate that the chance of Earth impact is only a 1-in-100-thousand over the next century, which of course is extremely small," Paul Chodas, Manager of JPL's Center for Near Earth Object Studies told Astrowatch.net.

Discovered in 2004, asteroid Apophis is slated to fly by our planet on April 13, 2029. Initial observations of this space rock indicated that it has one in 36 chance of hitting the Earth on that day, but additional monitoring of Apophis completely ruled out this possibility.

However, Alberto Cellino of the Observatory of Turin in Italy told Astrowatch.net in June, that although the potential impact in 2029 was excluded, we cannot rule out such event in more distant future. Given the fact that NEO orbits are chaotic, what is not dangerous today can become a candidate impactor in the future.

That is why astronomers, including Chodas, underline the importance of detailed observations of Apophis and its constant monitoring, which could confirm that this asteroid poses no danger to us.

"Apophis is certainly a hazardous asteroid, and for that reason it has been tracked extensively, and so we know its orbit very accurately. In all likelihood further tracking measurements will eliminate even that possibility (one in 100,000), Chodas noted.

Astronomers estimate that on April 13, 2029, Apophis will pass by the Earth at a distance of no closer than 18,300 miles (29,470 kilometers). Next close approach of this asteroid is expected to take place in April 2036 when it will miss our planet at a much larger distance of approximately 30.5 million miles (49 million kilometers).

Currently, there are 1,803 potentially hazardous asteroids (PHAs) detected to date. PHAs are space rocks larger than approximately 100 meters that can come closer to Earth than 4.65 million miles (7.5 million kilometers). However, none of the known PHAs is on a collision course with our planet.