Remains of alien child with deformed skull found in Crimea

In the ancient necropolis of Kyz-Aul in the east of the Crimea, archaeologists unearthed the burial of a child who lived in the 2nd century AD. The researchers called the burial site "the grave of an alien," the press service of the Archeology Foundation said. 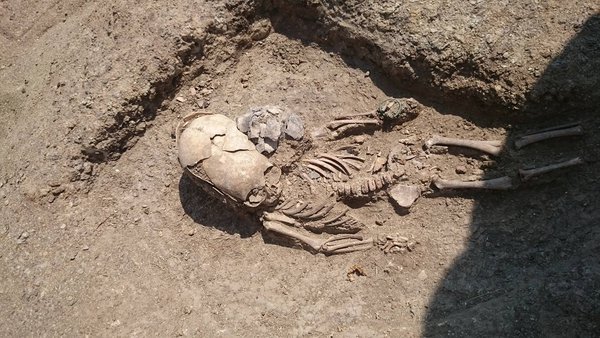 Scientists assume that the child died at the age of 18 months. The child's skull was seriously deformed as a result of a barbarous procedure that had been performed on the baby.

"It can be possible that the boy was to become a warrior, an equestrian cataphract, a defender of the Bosporan Kingdom," the report said.

Skull deformities can most often be observed among the Sarmatians, especially of those who lived in the late period. This peculiarity is one of the signs of their identification.

The founder of the Bosporan archeology, Paul Du Brux, discovered the phenomenon of skull deformity in 1826 in necropolises of the Cimmerian Bospor in the Kerch area. It is believed that the deformation of the skull was carried out to designate the affiliation of a person to a certain group of people and demonstrate their social status.

At the same time, supporters of the paleocontact theory believe that such skull deformations serve as irrefutable evidence of contacts with extraterrestrial beings. However, many researchers claim that skull deformities were intentional to make a person more aggressive.

The deformation of the skull was widely spread among the Sarmatians, who were very aggressive and militant people.

Next to the skeleton of the child, archeologists found a molded vessel, small beads of pastel glass and a bracelet of copper alloy.

In the layer of the soil, where the "alien" child was found, researchers often come across burial sites from the first century BC till the third century AD. Monumental stone crypts, which are believed to be burial places for the Sarmatian military noble men of the Bosporan Kingdom also refer to the same era.