Cows to save mankind from HIV

The immune system of cows produce antibodies that can neutralise96% varieties of the human immunodeficiency virus (HIV). 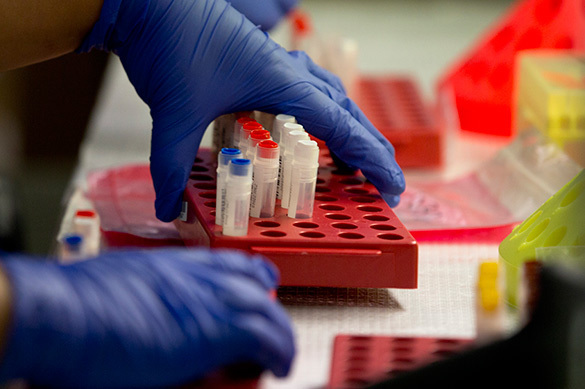 This gives scientists a hope to create the vaccine against this virus, an article published in Nature magazine wrote with reference to a study conducted at the Scripps Research Institute in La Hoya (USA).

To scientists' surprise, it takes cows little time to produce universal antibodies. Unlike their human analogues, cows' antibodies could cope with a type of HIV protein a lot better.

The immunodeficiency virus penetrates into human cells with the help of several proteins on the surface of its shell. Three or four years after contracting the HIV infection, the human immune system often begins to synthesise so-called broad-spectrum antibodies (bnAbs) that may neutralise several varieties of the virus at once.

Yet, the antibodies do not help in the struggle against the virus. By that time, the virus penetrates into all tissues of the body deeply and proceeds to the chronic stage.

Virologists have long been trying to "transplant" the above-mentioned process into uninfected animal cells, adapting them for mass production of bnAbs sets and create a vaccine capable of teaching the immune system to struggle against all varieties of HIV before infection occurs.

Nevertheless, all experiments on mice and even monkeys failed. Scientists proceeded to look for other methods of creating the vaccine that would cause the body to produce "universal" antibodies to HIV.

Scientists from the Scripps Research Institute conducted an experiment on calves. It turned out that their bodies began producing bnAbs literally 1-2 months after the injections were made. Having studied their structure, the scientists concluded that some of those antibodies were connecting with HIV as good as best human bnAbs.

During the year, the scientists were cultivating a set of antibodies in cows. As a result, they managed to neutralise about 96% of HIV strains, which marked a big step forward in developing a vaccine against the main disease of the 20th and 21st centuries.