How cats conquered the world

It is difficult to imagine today that mankind could do without cats in ancient past. A new genetic study reveals how an African wild cat turned into a domestic "tiger." 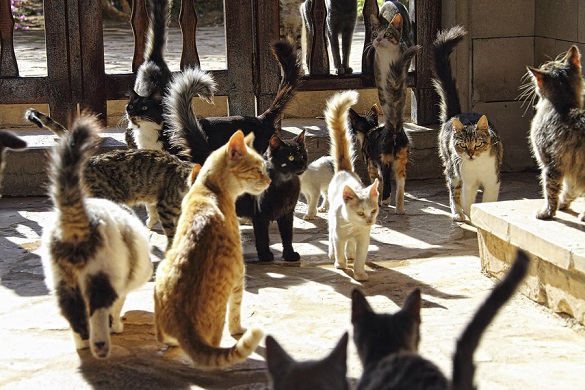 Domestic cats live and thrive in all part of the world, except Antarctica. The evolutionary success of cats is undeniable, but there is a number of serious differences between the furry creatures and their wild predecessors.

As evidenced by archaeological excavations in Cyprus, cats lived next to humans about 9,500 years ago. The domestication of four-legged pets in China began about 5,000 years ago. Prior to the Middle Kingdom era (between 2040 and 1783 or 1640 BC), in ancient Egypt, cats would hide in bushes and ruin nests, like other predators. In the end, cats settled in people's homes without losing their independent nature. In ancient Egypt, cats could get along very well with other Egyptian pets - monkeys and dogs. On one of the monuments, a cat is depicted opposite the goose as the personification of the all-powerful god Amun and his wife Mut.

People know a lot about their pets, but not many people know how cats became tamed and how they could surpass other animals in this quality. In the Roman society, the most popular hunter for rodents was the weasel. Nevertheless, the cat surpassed all its rivals due to its more sophisticated tactics in hunting for pests, better adaptation to urban conditions and, of course, its tremendous homeownership and benevolence towards humans.

Until recently, little was known about the predecessor of the domestic cat. A new genetic analysis of domestic cats published in Nature Ecology & Evolution helps to learn more about their pedigree and domestication.

Claudio Ottoni and his colleagues from the Belgian University of Leuven studied genetic materials extracted from bones, teeth and cat hair of two hundred specimens. The remains of the animals were extracted from various archaeological sites in the countries of the Levant, the Middle East, North and East Africa and Europe.

The results of the study of mitochondrial DNA showed that the progenitor of the modern domestic cat was a subspecies of the African wild cat Felis silvestris lybica, also known as the steppe cat. This native of Africa and the Middle East began its triumphal conquest of the planet from the Middle East and left its offsprings in almost every house on earth.

The new large-scale study was made possible due to the development of molecular biology. The new technology included the screening of a large number of genetic samples from areas, where climate conditions were unfavorable for DNA preservation. First of all, it goes about several countries of the Arab world and Egypt.

Without questioning the fact that the cat appeared in human life in the early Paleolithic about 9,000 years ago, scientists still remain uncertain whether the wild cat was only an object for hunting at that time. Genetic studies and archaeological finds indicate that wild cats appeared in first human settlements at the dawn of primitive agriculture. Rodents would be attracted to barns full of grains and other food products, and people started feeding cats before their relations developed further.

The cat was tamed or at least cats started living inside people's houses in the Middle East about 6,500 years ago. It is impossible to establish whether cats had been brought there from Egypt or they were secondarily domesticated there in the first millennium BC. The eastern Mediterranean was the third possible center of domestication of cats in the same period of time.

Researchers identified two pedigrees of Felis silvestris as subclasses IV-A and IV-C. It is interesting that most of presently living domestic cats are related to these genealogies. It means that many ancestors of modern-day cats originate from the Near East (Turkey, Syria, Iraq, Jordan, Saudi Arabia and other countries of the Arabian Peninsula) and Egypt.

The natural habitat of cats expanded significantly due to navigation. From the country of pyramids and pharaohs, four-legged purring animals willingly moved to new lands being attracted to the abundance of rodents on ships.