The Institute of Space Research of the Russian Academy of Sciences and the Moscow State Technical University named after Bauman develop the concept of three types of lunar rovers. One of them includes a heavy, nuclear-powered lunar rover. 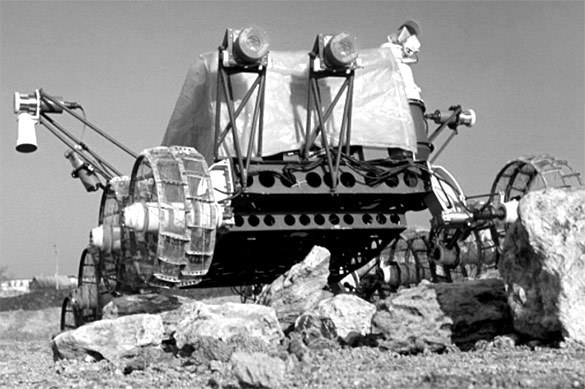 "In 2016, we continued the work on the development of mobile rovers for the scientific research of the Moon," the report from the Institute of Space Research said.

The "heavy" rover weighing 550-750 kilos is designed to study polar regions of the Moon. In addition to solar batteries, a nuclear power source is expected to be installed on the rover to enable the machine operate for up to 400 kilometers, including in the shade. Such power sources are usually installed on the spacecraft that fly away from the sun, such as Voyager spacecraft, for instance, to be able to operate without sunlight.

The nuclear-powered lunar rover is to carry up to 70 kilos of scientific equipment, including special drills to extract soil samples from the depth of 1.5 meters. The rover will also be equipped with 16 small stations to study the regolith and seismic activity of the Moon. The rover will be installing such stations on the surface of the Moon.

As for the weight, the machine will be similar to the world's first Lunokhod-1 of Soviet production. "Over the past 50 years since the creation of Lunokhod-1, the significant technological breakthrough will make the scientific complex of the rover a lot more powerful, while the weight of the machine will remain the same," officials said.

The second project stipulates for the construction of a medium-sized lunar rover weighing 200-250 kilos. The rover will be able to travel for 400 kilometers as well, although at the expense of solar panels only. The medium-sized rover is expected to be delivered on the Earth's satellite on board Russia's Luna-Resurs-1 landing station. The station is to be launched into space in 2021.

The third option is the "small" rover weighing 20-30 kg. The machine is designed to conduct scientific research at a distance of 500 meters from landing sites of large spacecraft, such as Luna Resource and Luna-Globe (Luna-25 is expected to land on the Moon in 2019). The small rover will be able to search for areas with a high water content, take soil samples and deliver them to the lander.

Noteworthy, the USSR had launched two Soviet rovers to the Moon: in November 1970 and in January 1973. The first one of them traveled 10.5 kilometers on the Moon and took 20,000 photos in ten months. The second rover was working for four months and covered the distance of about 40 kilometers.