The video about a possibility of self-destruction of our universe has been gaining popularity on the Internet recently. 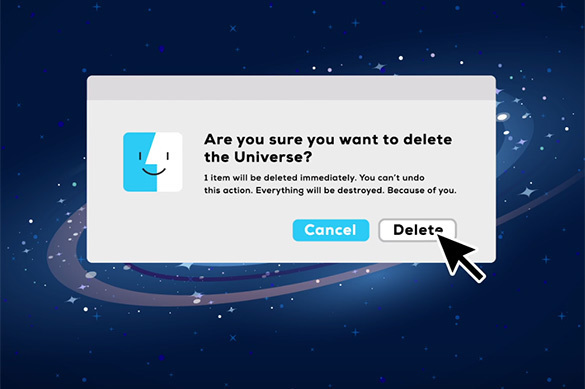 The idea about the destruction of the universe is based on the hypothesis of ​​vacuum instability. Any system in our world has a certain amount of potential energy. For example, a ball on top of the hill under the influence of gravity tends to release the energy and fall much lower, to thus become  "stable."

Space vacuum that appears to be stable due to the complete absence of substance in it, is likely to be fraught with great danger.

In pictures: Black holes, mystery of the Universe

Space vacuum is not as empty as it may seem to be. Vacuum in space is filled with quantum particles, which, in turn, may seek their own "stability" to annihilate the material world in its entirety during the process.

To designate potentially dangerous vacuum, scientists introduced the notion of false vacuum, in which there is a certain Higgs field.

The Higgs Field is an energy field that is thought to exist everywhere in the universe. The field is accompanied by a fundamental particle called the Higgs boson, which the field uses to continuously interact with other particles. As particles pass through the field they are "given" mass, much as an object passing through treacle (or molasses) will become slower because they now cannot travel at the speed of light because they have mass.

Scientists do not know what may trigger total annihilation, but at the same time, they admit that the disaster has already started somewhere in the universe. Noteworthy, our universe expands at the speed faster than the speed of light, so there is a chance to "fly away" from the sphere of death.

To crown it all, researchers believe that false vacuum is a speculation based on our current understanding of particle physics which might be wrong.