Atomic bomb is the only deterrent weapon

65 years ago, on 18 October 1951, nuclear testing of the RDS-3 atomic bomb took place. Successful results were the main reason to decide to equip the Air Forces with nuclear weapons. Production of the RDS-3 and Tu-4 carrier aircraft was put into effect. 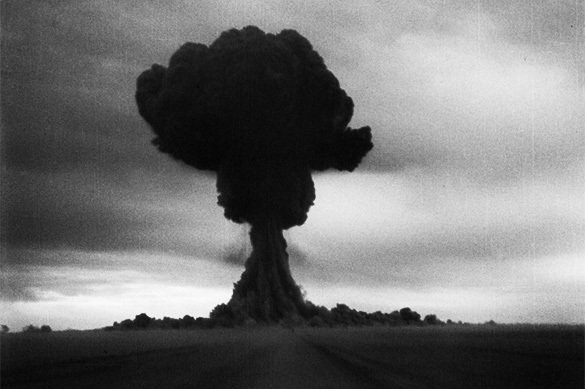 Vladimir Gubarev, writer and the only journalist who was let to the Chernobyl nuclear power plant after the explosion, told Pravda.Ru what has changed since then.

On 18 October the Soviet-made bomb was set off. That was when creation of our own nuclear weapon was started. And in three years we left the US behind due to development of a thermonuclear bomb.

In 1951 there were only five nuclear explosives of the very primitive construction. While the Americans saved up to 100 nuclear charges. By 1955 the proportion was one to fifty. Development of thermonuclear weapon changed everything at the time.

What was done in the 1951 became the basis of all the atomic weapons which exist today. And what was done on thermonuclear weapon in the 1953 and 1955 has been used till today. Now just technical, technological progress is taking place.

Today the nuclear sphere in Russia is completely self-sufficient.

Our famous Satana missile has 10 nuclear warheads. And there are 40 targets more. But nuclear weapon is nothing without carriers. Thus, it's extremely important that we have state-of-the-art aircraft and missiles.

Can the nuclear weapon be localized?

No. What is nuclear weapon? I saw a lot of terrible things and the most terrible one is explosion of nuclear weapon. Witnesses of such events of the 1949, 1951 and 1955, including famous scientists, noted that it was exceptional, beautiful, but very terrible. It was not by chance that Igor Kurchatov who came back after an explosion of an atomic bomb told Anatoliy Aleksandrov: 'It's utterly terrible'. And he went to testings no more.

How close are nuclear testings to application in reality? Nuclear weapon, is it created to hold the whole world in awe, or there's probability that it will be used?

It is the only deterrent weapon. It would be impossible to deter such a huge country as Russia with now small population (150m) without nuclear weapon. And nuclear weapon is a guarantor of some peace. Otherwise it's impossible to defend oneself. Namely fear of mutual destruction guarantees that there will be no war. Because waging a nuclear war is not insane, it's superinsane.