Bright spots on the dwarf planet Ceres continue to puzzle researchers. When recently a team of astronomers led by Paolo Molaro of the Trieste Astronomical Observatory in Italy, conducted observations of these features, they found out something unexpected. The scientists were surprised to detect that the spots brighten during the day and also show other variations. This variability still remains a mystery. 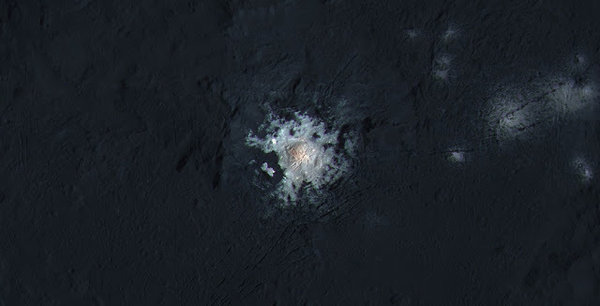 The bright features have been discovered by NASA's Dawn spacecraft which is orbiting this dwarf planet, constantly delivering substantial information about it. These spots reflect far more light than their much darker surroundings. The composition of these features is discussed as the scientists debate if they are made of water ice, of evaporated salts, or something else.

Molaro and his colleagues studied the spots on Ceres in July and August 2015, using the High Accuracy Radial velocity Planet Searcher (HARPS), as was reported by the European Southern Observatory (ESO) earlier this year. This instrument, mounted on ESO's 3.6m telescope at La Silla Observatory in Chile, enables measurements of radial velocities with the highest accuracy currently available.

By utilizing HARPS, the researchers found out unexpected changes in the mysterious bright spots. However, at the beginning they thought that it was an instrumental problem. But after double checking, they had to conclude that the radial velocity anomalies were likely real. Then the team noticed that they were connected to periods of time when the bright spots in the Occator crater were visible from the Earth. So the scientists made an association between them.

However, these detected variations still continue to perplex the astronomers as they haven't found a plausible explanation for their occurrence.

"We know nothing about these changes, really. And this increases the mystery of these spots," Molaro told Astrowatch.net.

One of the proposed hypotheses is that the observed changes could be triggered by the presence of volatile substances that evaporate due to solar radiation. When the spots are on the side illuminated by the sun they form plumes that reflect sunlight very effectively. The scientists suggest that these plumes then evaporate quickly, lose reflectivity and produce the observed changes.

"It is already well known that a lot of water hides beneath the surface of Ceres, so water ice or clathrates hydrates are the most natural hypotheses. But a proper answer will be hopefully provided by scientists working in the Dawn team in the coming months," Molaro said.

He noted that the indication of variability needs to be confirmed by direct imaging of Occator's bright spot at the highest available spatial resolution.

"This kind of measurements are underway. I would say that the detection of a variability improves our ignorance rather than our understanding of this planetary body," Molaro revealed.

The team is currently applying for further observations by the end of this year to repeat in a more systematical way what they have done in their pilot project. An important aspect of their work is to have shown a new way to study Ceres from ground, which could turn out to be useful even after the end of the Dawn mission. However by now, they are eager to see the results from the Dawn spacecraft in the next months.

If the team's theory is confirmed, Ceres would seem to be internally active. While this dwarf planet is known to be rich in water, it is unclear whether this is related to the bright spots. It is also still debated if Ceres due to its vast reservoir of water, could be a suitable place to host microbial life.

"Life as we know it on Earth needs liquid water, biogenic elements and a stable source of energy. Is Ceres a good place to have these things simultaneously and for a substantial amount of time, like billions of years? Nobody knows at the moment," Molaro concluded.