When bacteria are good

Nature magazine: While we are destroying out ecosphere, namely the planet which hosts us and its inhabitants, we also have good news stories: the  relationship between a species of squid and a bacteria which protects it. Enter center stage Hawaiian bobtail squid and Vibrio fischeri. 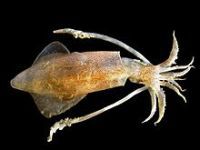 The article in Nature "Microbiology: Here's looking at you, squid" by Kent Nishimura examines the relationship between the Hawaiian bobtail squid (Euprymna scolopes) and a bacteria called Vibrio fischeri. The article highlights the relationship between an intelligent animal and an equally intelligent bacterium. The research was carried out by Professor Margaret McFall-Ngai.

The study concentrates on the underside of the Hawaiian bobtail squid (Euprymna scolopes) which contain a light organ in two chambers which is inhabited by a bacteria which has glowing characteristics, called Vibrio fischeri.

A marriage of convenience? It appears so. According to the study, the luminescence of Vibrio fischeri matches the light from the Moon above and cancels out the shadow of the squid as it preys on animals and plants on the sea bed.