What is the soul? 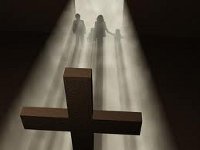 Christianity and many other religions sets forth the tenet that God gave all humans a soul, the "breath of life," which is the essence of consciousness (the ability to be aware of the past, present and future) and the essence of their awareness of being.  Christians believe that we were created in God's image and are a part of God, the Creator of our Universe and probably many more universes [1-2].  As a religious physicist, I have argued that God is an infinite (or at least higher dimensional) entity who may simultaneously exist inside our Universe and outside of our universe via the Holy Trinity [1].  Consequently, I have struggled to understand how we as finite humans residing in finite four-dimensional spacetime (x,y,z, and t) could also be a part of God who is likely infinite.  Jesus Christ, the Son of God, also resided in our four-dimensional Universe.  There are details associated with His glorious resurrection that I think may offer tremendous insight and clues into what our soul may constitute, which, thinking deeply about gave me an epiphany of sorts that I will presently discuss.

One of the most fascinating aspects of being human is the ability to create.  Creation, in some sense, requires the ability to "think outside of the box" and to distance or separate the mind from the problem to be solved or studies as an external, unbiased observer.  In fact, mathematics might be viewed as our effort to establish a logical template for our apparently infinite ability to create (at least in our minds which I call the playground of the infinities).  Yet our mathematics goes far beyond conventional four dimensional spacetime - beyond our learned and physical intuition - and predicts higher dimensions (as required for String Theory, e.g.) and even predicted non-Euclidean (Lobachevskian and Riemannian space) which was later integrated into Einstein's relativity (via spacetime curvature).  Thus, it would appear that there is something fundamental associated with our ability to create that can transcend spacetime and biology which I argue is integral to our soul.

When Jesus perished on the Cross and was resurrected three days later, numerous witnesses attested to the fact that He could pass through walls.  How could one person living in our universe be able to go through walls?  Well, if one lives in a higher dimension encompassing our universe, it becomes very easy to go through walls.  This reminds me of the famous novel, Flatland [3-4], where a three dimensional sphere visits a two dimensional square imprisoned in a two dimensional jail and the sphere seemingly appears (to the square) as a two dimensional circle, which first grows in diameter, then diminishes, and then disappears.  Thus, if resurrected Jesus had higher dimensional properties, then His ability to literally appear and disappear from rooms and walk through walls could be a logical possibility [5].  Beyond this, considering all of the miracles attributed to Jesus, where and what was His energy source?  How could God appear to Moses as a cool fire?   Could they not have come from other dimensions that we just can't see?

On top of this, I have always wondered how souls could manage to travel the full span/dimensions of our Universe - assuming that it is bounded, and if they were so inclined - without the requirement that the journey would require thousands of years assuming they travel at the speed of light [1-2]. Now for pure energy traveling at this speed, time does cease, but for those of us rooted as physical matter (i.e. with physical bodies), we would never be able to witness their full journey to the ends of spacetime in our lifetimes.

Thus, it occurred to me that we, like God, must have a component of our being that transcends four dimensional spacetime just as we can so easily do in our imagination.  In that spirit (literally), our soul must be infinitely- or at least higher- dimensional to enable our creativity.  Then, travel of enormous distances (e.g. parsecs) becomes trivial for the untethered soul - moving from one four dimensional spacetime point to another - by moving to a higher dimension and back to four dimensions.  For example, traveling from the North pole to the South pole along the curved surface of the Earth is far longer than by tunneling through the center of the Earth.  Wormholes have been postulated as a means to enable and assist the astonishingly enormous distances associated with space and/or time travel [6-7].  These distances may be nearly impossible for us to journey as four dimensional matter-constituent creatures (except for Jesus, of course, the Son of God - the Creator of everything), but our soul can probably easily travel them if it has a higher dimensional component.   Viewed in this way, we can better understand how someone resurrected might be able to appear out of nowhere and easily pass through walls.  There are of course other means (e.g. quantum tunneling) to traverse seemingly impossible barriers but that would take us too far afield.

We can also better understand the efforts of those who seek to deny or take us away from God to "prove" that all of our existence is completely confined within the "reality" of four dimensional spacetime which, in my opinion, is not completely.  We do live in a spacetime "bubble" of sorts which works quite nicely on its own principles of physics.  However, the very fact that our universe is expanding into nothingness just as a two dimensional balloon surface expands in three dimensions of space demonstrates in my opinion that there are higher dimensions outside of our universe.  Even String Theory predicts this [8].

Materialism can be considered as an attempt to confine our free dimensionally-transcending spirits within the limits of our universe and to forget that we have something inside each of us that is far greater and to hide us away and from and make us forget about the likely infinitely-dimensional Creator of spacetime and of many more universes of potentially varying dimensions - God.   When our material/physical bodies perish, our infinitely-dimensional or higher dimensional soul returns to its Creator and escapes the confines of our universe.  In my opinion, our souls are tiny pieces of an infinite and yet ever-growing whole.  This is how we were created in God's image - we are infinitely or at least higher dimensional pieces of God.   I do not pretend to claim that my simple theory explains everything, nor that it is necessarily "correct."  It is only a theory, of course.  But it certainly inspires me to continue the quest for better understanding of my Creator which I suspect will never end.  It also demonstrates that science and theology are not at odds with one another but in my opinion, mutually inspire and complement one another [9].   You can be a scientist and believe in God despite those who ignorantly claim otherwise.

I will close my essay with a vision that I just can't seem to get of my head.  That is of large numbers of fireflies (souls), generating their own creative energy/light within a span of different universes of varying dimensions flying into the infinite expanse of darkness/nothingness, illuminating it, all in the presence of an infinitely bright light (God) that created them all.  It's a truly beautiful vision. Glory be to God!