Is there life deep down below?

Communities of microbes, sustainable ecosystems deep below the Earth's crust? Not probably, but certainly and not only at one site, according to an article printed in the magazine Nature on December 17 (*). Will the new research also help scientists discover life beneath the crust of Mars? 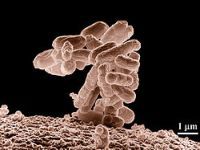 Almost two years after scientists discovered water trapped underground for a billion years, perhaps more, deep inside a mine in Ontario 2.4 kilometers below the Earth's crust - and more importantly, brimming with gases such as life-supporting hydrogen, a team of researchers led by Barbara Sherwood Lollar of Canada's University of Toronto has begun studying data collected from boreholes, looking for signs of life.

The study includes over 200 boreholes made in 32 mines, mainly in Scandinavia, Canada and South Africa, where in 2006, microbes living in rocks 4 kilometers below the Earth's crust under Witwatersrand and feeding off hydrogen were discovered. The conclusion by Dr. Sherwood Lollar, who discovered the billion-year-old water under Ontario, is that levels registered in the boreholes suggest higher than expected levels of hydrogen gas, and levels greater than those discovered under Witwatersrand.

This means that rather than hydrogen filtering downwards from the planet's surface, rocks themselves produce gas, by separating oxygen and hydrogen from water through natural radioactive activity processes within the rock itself. Dr. Sherwood Lollar considers that the discovery of high levels of hydrogen is significant, since over 70% of the rock forming the continents is pre-Cambrian (formed 581 million years ago to 485 million years ago), stating that "This massively changes the concept of where life can be on this planet".

Since microbial life lives off hydrogen and since there is far more hydrogen deep below the Earth's crust than originally thought, and given that microbial life has already been discovered at a depth of 4 kilometers, it appears that there are many lifeforms existing and to be explored.