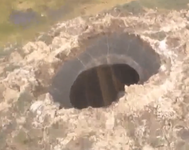 Russian scientists conducted a primary examination of the giant sinkhole in the Yamal-Nenets Autonomous District. The video of the bizarre hole on YouTube has received more than two million views in several days. As a result of the examination, the scientists concluded that the crater was of natural origin and did not appear either as a result of a manmade impact or the fall of a meteorite, the website of the regional government said.

There was no dangerous radiation detected on the site of the giant sinkhole. The scientists, who arrived to examine the sinkhole on the instructions of the regional governor Dmitry Kobylkin, said that the sinkhole appeared "as a result of a natural phenomenon, the nature of which is impossible to establish yet," the report said.

"There is no terrestrial impact here, - Marina Leibman, a member of the scientific mission, chief researcher at the Institute of Earth's Cryosphere said. - A careful examination showed that there was no trace of human presence on the site of the object. Assumptions about a hot meteorite are also groundless, otherwise, there would have been traces of charred rock," the specialist said.

In pictures: Mystery of giant sinkhole in Russia's Yamal

"On this site, there was a release of material from insides of the earth, - the scientist said. - I do not think that it was accompanied with an explosion, because in this case, high temperatures would have been required. This is purely a mechanical ejection, which most likely occurred due to increased pressure at the time, when some sort of a cavity was freezing and changing. Most likely, the cavity was filled with swamp gas."

The diameter of the inner edge of the crater is about 40 meters, and 60 meters on the outside. Fragments of rock were scattered as a result of the emission on the square of 120 meters, senior researcher of the Scientific Research Center of the Arctic, Andrei Plekhanov said.

To accurately determine the depth of the hole, one needs to resort to the help of professional climbers, said the specialist, noting that approaching the edge of the sinkhole was dangerous as the edges constantly crumble.

"The scientists say that the sinkhole is absolutely safe for people and does not impede gas production in the region. In the vicinity of tens of kilometers, there are no industrial facilities," officials added.

The video of the giant sinkhole appeared on the Internet on July 10. In the description to the video, its uploader, who shot the sinkhole while flying in a helicopter, said that it was formed 30 kilometers from Bovanensky deposit. According to the author of the video, the size of the sinkhole is so large that "one can descend into it on several Mi-8, without fearing to touch something."

The video shows that the sinkhole is surrounded with vegetation. A closer look on the territory around the object shows rocks scattered around the sinkhole, as it usually happens during explosions. It was also said that there were no research or exploration works conducted in the area of the sinkhole.