How many lives does modern tank have?

An ability to confront tanks has been an actual objective since 1916 - from the moment when the powerful war machine saw the light. Can the sword be stronger than the shield? Will tanks be able to resist the power of anti-tank means of the future? 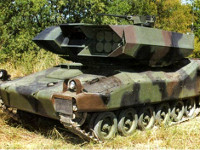 Hardly had British and French tanks appeared on the battlefields of World War I, when the Germans started looking for means to combat them. They found both passive and active means. First and foremost, there were anti-tank ditches that were too wide for tanks to cross, so tanks would simply fall into them. The Germans started throwing hand grenades on top of the tanks. During those years, the tank armor was too thin and could not resist attacks with the use of piercing bullets.

How did the British and the French respond? The Britons began to lengthen their tanks to be able to overcome obstacles. They would also throw into ditches big bundles of sticks fastened to the roofs of the tanks. For protection against armor-piercing bullets, tanks were covered with thicker armor. The French mounted additional armor plates on their machines. Finally, to protect tanks from grenades, the French designed gable roofs of their Saint-Chamond tanks. The British covered their rhombic tanks with a net, from which grenades would roll down on the ground, without having time to explode.

Afterwards, the Germans invented the world's first anti-tank rifle - a large Mauser rifle that fired large-caliber armor-piercing bullets. The weapon could bring a lot of damage, but Germany soon capitulated, so the Germans did not have time to use it properly.

During the Second World War, designers were protecting their tanks by increasing the thickness of armor and its slope. When those measures were not enough, tankers would cover their vehicles with sandbags, weld extra armor on them, etc. Those measures would make tanks a lot heavier, which decreased maneuverability. Poor maneuverability would lead to the fact that large-caliber artillery would be able to attack and destroy tanks easily.

It was then revealed that a 152-mm caliber projectile could destroy the tank turret, which, of course, meant the destruction of the vehicle. It was possible to increase the velocity of the projectile to achieve the same effect, without increasing the caliber. The limit of development of modern tanks (and anti-tank guns, too) is defined quite clearly, and depends on the strength of the steel used in the gun barrel, the energy potential of chemical propellant and the strength of the armor itself. There are projects of rail guns being developed, where the acceleration of a projectile will be conducted with the help of electricity. For the time being, the new weapon will be used for warships, as tanks are too small for such systems.

How can one destroy a modern tank that already comes complete with all possible means of protection, such as sloping armor, additional armor plates, and all sorts of devices that protect tanks from antitank missiles - anti-grenades, smoky aerosols and laser emitters? However, a tank is powerless against large-caliber projectiles or missiles. These considerations prompted the creation of kinetic armor missiles MGM-166 LOSAT that were tested in the United States during the time of the "cold war" with the Soviet Union and its allies.

Indeed, a missile, flying at the speed of 1,650 meters per second, could penetrate thick armor with its tungsten armor-piercing core. In fact, it was an increased armor-piercing shell with a very large weight and a rocket drive. The effect of the impact was impressive.

The trouble-free Humvee was supposed to become a standard carrier for such missiles. The first battery had already been put into service for American paratroopers, when the military realized that under the conditions of severe resistance, the vehicles would not last long. Therefore, they asked for more solid chassis and reliable caterpillar mechanism. In fact, it was a new tracked "tank destroyer."

Twelve rockets were hidden in the armored turret, armed with M2 machine gun that was mounted on the chassis of M8 light tank. The machine proved to be a success. High maneuverability, solid ammunition, 360-degree rotating turret, firing range of 5,000 meters, a possibility of simultaneous attack of two targets at once and armor that helped protect the crew from 25-30 mm shells. There could be no probable explosion of ammunition in case of destruction of the vehicle as there was no explosive in the warheads. In short, the Americans managed to create a killer vehicle capable of destroying any modern tank by striking it with its heavy missile. Then, they tried to build it on the basis of APC Bradley, and the result turned out to be quite decent as well.

However, the vehicle had not been passed into service. After the collapse of the USSR, the threat of tank armadas of Warsaw Pact countries fell sharply, and the idea was set aside. Furthermore, the progress in electronics and rocket engines brought up the idea of ​​creating a much more compact and, most importantly, much cheaper missiles. However, this idea has not died. The development of a more compact and cheaper missile with a range of 8,000 meters is being conducted as part of the program Compact Kinetic Energy Missile.

It is supposed to reduce the visibility of the machine by placing all of its missiles inside, rather than in a separate box. The missile, when being launched, would be thrown out from the body of the vehicle with the help of a powder charge or gasifier. This will reduce the launch time. The missile will be quite large, so it will be possible to install everything on it, including state-of-the-art on-board computer and most promising guidance system.