Women and the environment

As debate on climate responses persists, water levels rise and climate change is causing destruction around the world. Among the most affected are women, as they gather water, fish, or farm land affected by flooding. During pregnancy and motherhood, their health is more at risk. Meanwhile, their voices are often the last to be heard in environmental planning and management. They also have less access to land and productive resources. 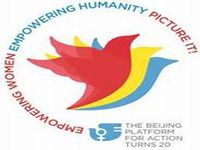 This year, as the UN observes the International Year of Small Island Developing States, the theme of World Environment Day (5 June) is "raise your voice, not the sea level". Here, we take a look at how women can and do make a difference. While not always recognized, women play a crucial part in ensuring that fragile ecosystems are protected, families are able to survive natural disasters, and natural resources are managed in a fair, efficient and sustainable way. Although women  have proven their skills in managing natural resources and adapting to climate change, their contributions are often taken for granted or not valued.

Women and the environment is one of the 12 critical areas of concern identified in the Beijing Declaration and Platform for Action, adopted by global leaders at the Fourth World Conference on Women in 1995. The Platform pinpointed three strategic objectives for government action on the environment. These include involving women actively in environmental decision-making at all levels, integrating their concerns and perspectives in policies and programmes, and establishing ways to assess the impact of development and environmental policies on women.

Nearly 20 years later, women are making inroads and governments are increasingly seeking out their expertise and leadership when making key environmental decisions. Still, much remains to be done to support women's roles in decision-making and secure a better future for all. To this end, the UN is working to place women at the forefront of sustainable development and efforts to confront the effects of climate change.