No meat-eating animals existed in the beginning

The Bible teaches in Genesis 1:30 that in the beginning all animals, birds, and insects subsisted on a vegetarian diet. God created a perfect world in the beginning. There was no struggle for survival, no disharmony and fighting among God's creatures. Suffering and death entered into the world only after man's sin. 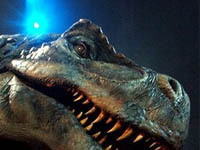 If there were no meat-eating animals in the beginning, then how do you explain the sharp teeth of dinosaurs? The panda bear, a living species today, has among the sharpest teeth of any creature but it mostly subsists on bamboo. Sharp teeth don't necessarily mean the animal was carnivorous.

No doubt, after sin entered the world, the animal world went through many transformations for life in a harsh world, but the world still was not as harsh as it would be after the great flood of Noah's day.

Before the world-wide flood, there was no rain on the earth. That's why mankind never saw a rainbow until after the great flood. How did crops get water? The Bible says in Genesis 2:6 that a mist arose from the earth which watered the whole face of the earth.

Before the great flood, the entire earth had a warm and temperate climate, even the North and South Poles. This is why fossils of tropical plants and animals have been found in the polar regions of the earth.

What gave the earth such a temperate climate? The Bible teaches in Genesis 1:7 that there was a great body of water above the sky. This feature would have had a greenhouse effect for the earth so that even the Polar Regions, furthest away from the sun, would have been warm.

When the great flood occurred, the Bible teaches in Genesis 7:11 that great amounts of water burst from under the earth and together with the water falling from above the sky, the entire earth became inundated with water and even the earth's land mass started to break and divide. It was this world-wide flood that caused the sudden death and fossilization of animals and plants over all the earth.

Before the worldwide flood, Noah was commanded to build an ark to save a remnant of human kind and other land forms of life. According to Genesis 6:14-16, the Ark was at least 450 feet long, 75 feet wide and 45 feet high. It was one long box that would be stable and couldn't capsize or overturn during the ravaging period of the flood.

Noah wasn't required to take every animal into the Ark, only two of each "kind," male and female of the land animals. Many of the sea animals would have been able to survive through the flood. The first pair of dogs in the Ark would have carried the recessive and dominant genes for producing all the varieties of dogs we have today. The same would be the case with all the other animals. God says in Genesis 1 ten different times that all life must reproduce after its "kind." We know from science that there are genetic limits to biological variations in natural species. A dog will always be a dog no matter how many varieties come into being. The genetic and biological similarities between all forms of life are due to a common Designer (God) Who designed similar functions for similar purposes in all of the various forms of life.

What about "Junk" DNA? The latest science shows that "Junk DNA" isn't junk after all! It's we who were ignorant of how useful these segments of DNA really are. Recent scientific research published in scientific journals such as Nature and RNA has revealed that the "non-coding" segments of DNA are essential in regulating gene expression (i.e. how, when, and where genes are expressed in the body).

God created all species, including micro-organisms, as complete and fully functioning from the very beginning. They couldn't survive any other way. A partially-evolved species wouldn't be fit for survival. Darwinian evolutionary theory would have us believe that, by random forces of nature, partially-evolved species came into existence along with partially-evolved skin, muscles, nerves, tissues, organs and then survived over millions of years as they eventually became complete. What utter nonsense!

Author`s name Babu Ranganathan
18:54
Ukrainian soldier uses chainsaw and fire to release US howitzer from ice trap
18:30
Onet: Ukraine will lose in six months due to shell shortage
17:36
Russian troops defeat Ukrainian troops in Zaporizhzhia region
14:50
Number of foreign mercenaries in Ukraine continues growing
14:17
Russians buy more than 50 tons of gold in 2022
13:57
Russia will not talk to Ukraine. Russia will talk to the West
13:34
USA's plan to give 20 percent of Ukraine for peace hoax
12:51
Medvedev: Ukraine as a state to be devastated, go bankrupt and be turned into colony
19:57
Russia will use all of its military potential to counter Western arms supplies to Kyiv
17:36
Consequences of NATO's possible supplies of fighter jets to Ukraine get clear
The West prepares army to invade Russia