The condition is known as erectile dysfunction and can affect up to half the male population over forty years of age. Risk factors are known to be diabetes mellitus, hypertension, obesity, hypercholesterolemia and now, cell phones according to a study published in the Central European Journal of Urology. 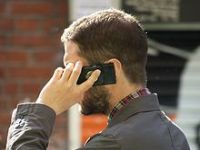 The study was undertaken by the Medical University of Graz, in Austria and Cairo University, Egypt and was published recently in the Central European Journal of Urology. While the results are preliminary and further investigation needs to be carried out, they suggest a link between the use of cell phones and erectile dysfunction.

The study was based upon two groups of men, one composed by 20 individuals with erectile dysfunction (ED) and the other by ten men without this complaint. All men answered a questionnaire on sexual performance and the use of cell phones. The men in Group A (affected by ED) showed substantially higher use of mobile devices such as the cell phone, Bluetooth or laptops, which emit radio waves (they used the devices or had them switched on for 17.6 hours a day as against 12.5 hours and carried their phones switched on for 4.4 hours, as against 1.8 hours in Group B, with the unaffected men.

The leaders of the study have, however, stated that the sample is too small to provide any firm evidence and that further studies need to be carried out.

Previous studies have pointed towards a possible link between cell phones and mobile devices and sperm death or decreased fertility, hotly denied by the cell phone industry.  The Environmental Heath Trust (EHT) raises awareness on the negative effects of prolonged cell phone use. One of the things it recommends is holding the cell phone as far away from the body as possible and not having one switched on near the bed while sleeping.

Another study prompted the expert committee of the International Agency for Research on Cancer (IARC) of the World Health Organization to classify "cell phone radiation as possibly carcinogenic to humans" in a report issued in May 2011.

While the cell phone industry will deny such allegations, it is clear that there is smoke, if not yet a flame, and further research needs to be carried out, while we may all thank the Environmental Health Trust for protecting our lives, and those of our families. The EHT website quotes the Chairman of the American Academy of Pediatrics, Robert Block, as stating that "Children, however, are not little adults and are disproportionately impacted by all environmental exposures, including cell phone radiation. In fact, according to [the International Agency for Research on Cancer], when used by children, the average RF energy deposition is two times higher in the brain and 10 times higher in the bone marrow of the skull, compared with mobile phone use by adults."