Bad news from Fukushima. Over two years since the nuclear explosion which wrecked the facility after the 2011 earthquake and tsunami, the Pacific Ocean is being poisoned daily with lethal doses of highly toxic substances. This has been going on for over two years and according to some analysts, millions of people are at risk. Including in the USA. 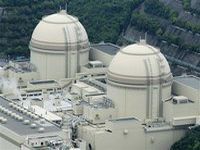 Michael Snyder is among many researchers investigating the tonnes of toxic waste pouring every single day from Fukushima for some 750 days, and it continues, every single second of every minute of every day, week and month. In his article "Radioactive Water From Fukushima Is Systematically Poisoning The Entire Pacific Ocean" published originally in the website The Truth on August 6, 2013, he claims that "a massive amount of highly radioactive water is escaping into the Pacific Ocean from the ruins of the destroyed Fukushima nuclear facility in Japan."

The article identifies tritium, cesium and strontium as the toxic substances pouring into the Pacific Ocean and being spread far and wide by ocean currents, rain and wind. Due to the fact that these substances are toxic and are almost certainly in the food chain, then people consuming contaminated Pacific seafood are probably already contaminated and possibly have rising levels of toxicity building up inside them.

Let us see what the operator of the plant, TEPCO, or   Tokyo Electric Power Company,  has to say. On Monday the operator admitted that since May 2011, between twenty and forty trillion becquerels of radioactive material have poured into the Pacific Ocean. So much for the official line that the contaminated water was contained in the holding tanks under the plant.

It gets worse. There is a developing emergency situation at one of the reactors and it is spinning out of TEPCO's control: Japan's Nuclear Regulatory Authority has confirmed that radioactive material has breached a security barrier. In other words, TEPCO has lost control of the situation.

400 metric tonnes, every day, is being pumped into the reactor, radioactive water is getting into the sea, cancer-causing elements are leaking into the Pacific Ocean. But it gets worse still - the levels of radioactive materials is rising: levels of Caesium-134 rose by 90 times over the weekend and Caesium-137 rose by 86 times between Friday and Monday, according to TEPCO.

Quite how polluted the Pacific Ocean is and how far the contamination has spread is still a mystery. When people start dropping dead in California and Australia, we may find out.