The history of North American Indians still raises many questions in the scientific world. The culture of this people remains a mystery, and its origins are mysterious because lack of evidence as to who was their ancestor. Scientists know little about the surviving descendants of Indian tribes. Recently, however, anthropologists found some of them. 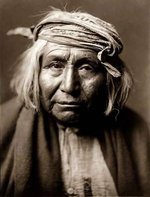 The latest study by American scientists became a sensation in the scientific world. Historians have found that the descendants of the ancient people inhabiting the territory of North America about 5,000 years ago are still alive today. This conclusion was made by researchers after comparing the DNA of fossils found on the northern coast of British Columbia in Canada and the living people who belong to the first several tribes from this area.

This discovery marks a very important step in the study of Indians, as scientists previously had only a trace of their ancestors. According to genetic research conducted by the University of Michigan, the ancestors of today's Indians and Eskimos moved to America from northeast Asia through the so-called "Bering Bridge," an ancient wide strip between America and Asia on the Bering Strait that disappeared over 12,000 years ago.

In turn, an international team of researchers that included members of the Institute of Cytology and Genetics with the Russian Academy of Sciences concluded that the genetic home of the first Americans was Altai. Approximately 20-25 thousand years ago, according to the scientists, the ancestors of the Indians came from there and settled in Siberia and eventually reached America. Genetic studies made a great contribution to the study of the history of Indians. Researchers found unique mutations present in the DNA of Native Americans known as a Q-line in the Y-chromosome of Altaians.

Subsequent studies have shown that nearly all modern Native Americans have in their pedigree traces of six women who crossed the Bering Strait about 20,000 years ago. It proved extremely difficult for the scientists to obtain more accurate data. After the colonization, the blood of European men often mixed with the blood of Indian women, resulting in the DNA from the genome in general and from chromosome Y (male sex chromosomes) containing a substantial part of European markers.

Today, however, the American scientists were able to solve this issue. To be able to investigate only the female part of the DNA that does not contain European markers, a molecular anthropologist at the University of Illinois and his colleagues chose to analyze the mitochondrial DNA contained in the egg and transmitted only through the maternal line.

For the purpose of the study, the researchers collected the DNA from sixty currently living people from the tribes of Tsimshian, Haida and Nisga'a on the northern coast of British Columbia. They compared the samples obtained with the mitochondrial DNA extracted from the teeth of four ancient human remains. Experimental skeletons o 6,000 years and 5,500 years old have been discovered near an ancient house on one of Lucy Islands in British Columbia. Another pair of skeletons used by the scientists in the study, age 5,000 and 2,500 years, was discovered on Dodge Island in British Columbia.

The results showed that the DNA of the three living representatives of Tsimshian and Nisga'a tribes matched the DNA from the skeleton found on Dodge Island. In addition, the study found that the DNA of three of the skeletons corresponded to at least one of the now living. The molecular anthropologist said that they found the ties that bound maternal lines from the mid-Holocene 5,000 years ago with the maternal lines of the descendants living today in Native American communities.

In turn, Jennifer Rehg, an anthropological geneticist at Northwestern University in Illinois who was not directly involved in the study noted that the finding of the two mitochondrial DNA in ancient humans and modern inhabitants of the north-west coast of America was of particular interest. "This suggests that there is continuity in the longest continuous settlement in this region," Jennifer Rehg stated.

The curator of the Museum of Northern British Columbia, historian Susan Marsden noted that an important role in the further study of the genetic history of the region may be played by oral traditions of the Indians. "Stories of such communities were maintained in oral traditions that partially track matrilineal inheritance, and these stories suggest further migration in the region over the past 5,000 years," said the historian.

Susan Marsden's point of view is shared by her American colleagues from the University of Illinois. Currently researchers are conducting further studies to determine how the genetic history of the region crosses the line of oral histories of Indian tribes.

Legends about the origin of the fire, humans and animals took the central stage in the tales of the American Indians. Later myths about Cayman appeared in their culture. This was the patron of food, water, good spirits of plants, as well as inherent in all types of mythology tales of creation. When the Indians began to widely use maize in agriculture, a legend of a supreme female deity - "goddess with braids" - spread around.  Interestingly, the goddess had no name. Scientists know only that the image of the goddess brings together the Indians' idea about the spirits of plants and animals. The "goddess with braids" is also the personification of the earth, sky, and life and death.

Verbal stories of the Indian tribes have played a role in the study of Carl Gustav Jung and his successor Joseph Campbell, who were engaged in the study of the unconscious and the archetypes based on Native American myths.

In addition, many thoughts and ideas created by the Indians are widely spread today in the western society. For example, such sayings as "It does not require many words to speak the truth," "When the last tree has been cut down, the last river poisoned, the last bird caught, only then will we realize that one cannot eat money." "When you were born you were crying and everyone else was smiling. Live your life so at the end, you are the one who is smiling and everyone else is crying." And, finally, to the question "What is life?" Indians replied: "It is the light of a firefly in the night. It is a breath of a bison when winter comes. It is a shadow on the grass dwindling at sunset."

Without doubt, the study of historical and genetic relationships of Indian people is of great importance for modern science. Creating one of the most highly developed cultures, the Indians made a great contribution to the world civilization. The peoples of the world have adopted from the Indians cultivation of corn, potatoes, tomatoes, sunflowers, cocoa, tobacco, pepper, beans, peanuts, agave, beans, squash and other crops. No less significant is the contribution of the Indians to the spiritual treasures of human culture.