The latest UN Report on Climate Change, The Global Climate, 2001-2010, A Decade of Extremes, paints an alarming picture of a world faced with unprecedented climate extremes with rising temperatures smashing national records. 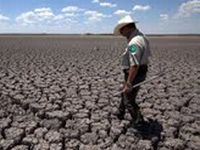 The Global Climate 2001-2010, A Decade of Extremes shows that in the first decade of the new millennium, more temperature records were broken across the globe than at any other time, being the warmest decade for the northern and southern hemispheres both on land and at sea since records began, in 1850.

The result of this, according to the report, is a dramatic rise in polar ice melts and a shrinking of the world's glaciers, culminated with a rising sea level. The tangible effects of this were an increase in extreme floods, flood and drought cycles, tropical storms and at least 370,000 deaths due to extreme weather conditions. Floods were experienced from Europe to Australia, from Africa to Asia - in 2010, 20,000,000 people were affected by flooding in Pakistan and 2,000 people died. Droughts were also severe and prolonged, affecting the Amazon, Australia and Africa, having lasting negative environmental impacts. Regarding storms, there were over 500 cyclone disasters which killed around 170,000 people, affected 250 million and caused some 380 billion USD-worth of damage.

The report indicated that "Rising concentrations of heat-trapping greenhouse gases are changing our climate, with far reaching implications for our environment and our oceans, which are absorbing both carbon dioxide and heat." Global concentrations of CO2 in the atmosphere rose by 39% since the beginning of the industrial revolution (1750), while nitrous oxide concentrations increased by 20% and methane concentrations, by 300%.

Findings were taken from surveys involving 139 national meteorological and hydrological services and socio-economic data and analysis from  UN agencies and partners.

Michel Jarraud, the Secretary-General of the World Meteorological Organization (WMO), which produced the report,  stated at the Intergovernmental Board on Climate Services, which oversees the implementation of the Global Framework for Climate Services, (Geneva July 3 to 5): "We are already seeing the effects of climate change and so we need to take action through the use of scientifically-based climate services to cushion the impact on our environment, our economies and our societies."

"Decisions on flood defences and dams, for instance, are often based on past experience and not on the likely future. But the past climate is no longer a sufficient guide to the future. We need to anticipate the climate we shall have in the next 50 to 100 years. It's a huge challenge but it's not a hopeless challenge if we all work together."