The British government declassified hundreds of materials about unidentified flying objects. The materials are no longer useful for the British authorities. The defense department involved in the study of unidentified flying objects, decided to expose the materials to the general public to let everyone see that aliens do not exist, nor do they pose any threat to humans. The documents are available on the website of the Ministry of Defense. 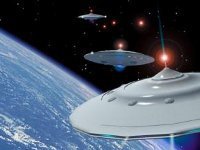 More than 25 files have been exposed containing more than 700 documents on UFO observations from 2007 to 2009. They represent reports from people who became "eyewitnesses" of strange phenomena. One of the most original ones belongs to the child, who wrote that he/she had seen suspicious lights in the sky. The child attached a drawing of an alien, waving a hand from a spaceship.

Another curious one is a report from an Englishman, who had been allegedly living with an ET for several years. The man says and aliens abducted his dog, car and tent while he was camping. There are records saying that UFOs were seen above the Parliament building and near the famous Stonehenge, reports the BBC.

Nick Pope, a former employee of the special department said that he hoped that readers would have a laugh while reading the documents.

The British government began to investigate the cases that established the existence of UFOs in 1952. During that time, the largest number of reports of UFO sightings came in 1978 (750 messages), when movie theaters were showing Steven Spielberg's "Close Encounters of the Third Kind." The second "peak" occurred in 2009, when the department received more than 640 calls and emails. Most of them contained information about hovering and shiny objects. One of the reports, for example, said that something was glowing in the sky "like an angel."

"Experts linked the growth of complaints in 2009 with the popularity of Chinese lanterns. Many records of oddly shaped celestial objects of orange color describe Chinese lanterns, although witnesses did not recognize them," David Clarke, the author of the book The UFO Files believes.

According to officials of the Ministry of Defense, the majority of UFO reports have a logical explanation, and only a part of them still remain mysterious. Among them, for example, there are statements from police officers and pilots, says Sky News.

Despite the growth in the number of reports about aliens, in 2010, Britain's Ministry of Defense disbanded the special department that was studying such reports. The department assumed that for more than half a century of UFO observations nothing had been found that would prove the existence of UFOs.